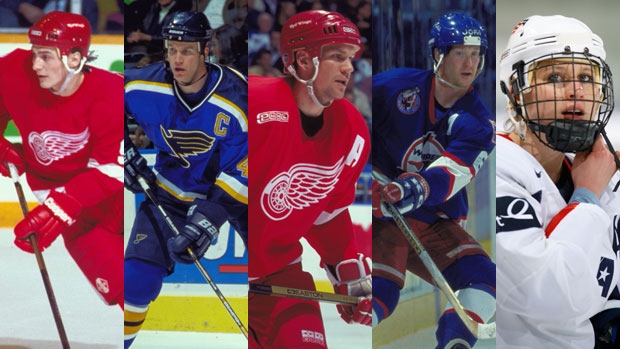 Nicklas Lidstrom, Sergei Fedorov, Chris Pronger, Phil Housley and Angela Ruggiero will be inducted into the Hockey Hall of Fame as the Class of 2015.

Bill Hay and Peter Karmanos were also inducted as builders.

Lidstrom’s election was a matter of inevitability. One of the most dominant defenders of his era, Lidstrom is a seven-time Norris Trophy winner, including six wins in seven seasons between 2001 and 2008. Lidstrom won four Stanley Cups with the Detroit Red Wings, earning the 2002 Conn Smythe Trophy as Playoff MVP. He became the first European to win the award and in 2008 became the first European to captain a club to a Cup title.

His international resume is equally impressive as Lidstrom won World Championship (1991) and Olympic (2006) gold representing Sweden. He became the 17th member of the “Triple Gold” club at the 2006 Turin Games.

Fedorov electrified the NHL as one of the first wave of Russian players to hit the NHL after the fall of the Iron Curtain. Joining the Red Wings in 1990, Fedorov helped turn the franchise into a perennial winner alongside Lidstrom and captain Steve Yzerman. In 1994, Fedorov became the first European player to ever win the Hart Memorial Trophy as League MVP, taking the Lester B. Pearson Award - MVP as voted on by the players - and Frank J. Selke Trophy, awarded to the NHL’s best two-way forward. He won three Stanley Cups with the Red Wings and retired first all-time among Russian scorers in the NHL with 1,248 points.

Pronger makes the Hall of Fame despite not actually being retired from the NHL. The 40-year-old Pronger is currently under contract to both the NHL’s Player Safety Department and to the Arizona Coyotes who acquired his rights over the weekend. That said, Pronger has not played a game since 2011-12 and is never expected to return to the ice as an NHLer.

A physical force, Pronger’s NHL career featured dominant stretches that saw him become the only defenceman since Bobby Orr to win the Hart Trophy, taking it in 2000. Pronger also took the Norris that season and was named an NHL ALL-Star on four occasions. Pronger won two Olympic gold medals with Canada (2002 and 2010) and earned Triple Gold status when he won the 2007 Stanley Cup with the Anaheim Ducks.

Elected in his ninth year of eligibility, Phil Housley enters the Hall of Fame as the fourth-highest-scoring defenceman in NHL history. The St. Paul, Minn.-native was an offensive force, scoring 60 points or more in his each of his first 11 seasons in the League. That run culminated with a career-high 97 points with the Winnipeg Jets in 1992-93. He was selected to appear in seven NHL All-Star Games and was named a finalist for the Calder Memorial Trophy in 1983 and the Norris in 1992. He was also a member of the United States’ 1996 World Cup of Hockey-winning squad. He was named to the IIHF Hall of Fame in 2012.

Ruggiero is one of the most decorated players in women’s hockey history. Representing the United States from 1997 to 2011, Ruggiero won four Olympic medals including gold at the 1998 Nagano Games. She was twice named the Olympic tournament’s top defender, taking the honour at the 2002 and 2006 Games. Over her 14-year career, Ruggiero won 14 medals at the Olympic Games and World Championships including four gold and six silver at the Worlds. She becomes the fourth woman elected to the Hall of Fame as a player, joining former teammate Cammi Granato and Canadians Angela James and Geraldine Heaney.

Hay served as President and CEO of both Hockey Canada and the Flames (1991-98). He was appointed Charimand and CEO of the Hockey Hall of Fame in 1998. Hay also enjoyed an eight-year NHL career, winning the Calder Memorial Trophy in 1960 and the Stanley Cup in 1961 with the Blackhawks.

Karmanos has been part-owner of the Carolina Hurricanes since purchasing the then-Whalers with his business group in 1994. He oversaw the club’s move to Carolina in 1997. He won the Lester Patrick Trophy awarded for service to hockey in 1998. He was inducted into the United States Hockey Hall of Fame in 2013.