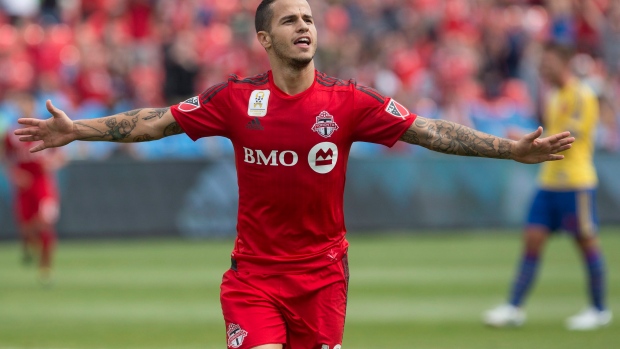 Giovinco scored two goals and set up a third Saturday afternoon to lift Toronto FC to a much-needed 3-1 win over the Colorado Rapids. Then an irate Perquis — who scored Toronto's other goal, his first in MLS — put on an uglier show in the TFC dressing room, yelling in French at a local reporter who had clearly got under his skin.

The stunned reporter eventually left as a steaming Perquis, wearing a towel and an icepack on his leg, kept emerging from the bathroom area to scream some more.

It wasn't clear exactly what set off the French-born Polish international, who has battled injuries and inconsistent play in his debut MLS season. But coach Greg Vanney said after the game his team was tired of unfounded criticism.

"I'm proud of their effort," Vanney said. "A lot of people are saying a lot of things about this team and they proved today that they are competitors."

Asked what or who he was referring to, Vanney said: "Anybody who questions the belief of our team or whether we believe in what we're doing or our desire or any of those things, then guys get pissed off. To me it's people who don't know our team, who don't know our players.

"I heard another comment about our guys don't like to play with each other. There's some question of that going on. I think it's nonsense and I shared it with the group and they were pissed off as I was. And they feel like they have a chip on their shoulder as they should. And they came out today and we started the game the way we need to start games and we battled until the end. And I was proud of them for that because we believe we always have something to prove and we're going to step out on the field to prove it every time we play."

Remember this is a franchise that has failed to make the post-season since entering the league in 2007. Vanney and the current regime are trying hard to make people forget past failures.

There has been somewhat of a siege mentality about Toronto in recent weeks as the club has wobbled in the stretch run. Saturday's win ended a three-game losing streak and followed a 10-game stretch (3-6-1) in which the club had failed to collect 20 of 30 available points.

While Vanney is always courteous and professional, the club's media handlers — acting on orders from above — have tried to limit his interactions with reporters with scrums cut short.

There has been no explanation as to the reason behind the sudden "loose lips sink ships" approach.

Perquis, a charming man when he isn't on the rampage, eventually calmed down. But the ugly incident, which saw several teammates smirking at the tense interaction between the player and reporter, was poorly handled.

Toronto FC captain Michael Bradley, for one, said he doesn't pay attention to chit-chat around the team.

"I couldn't care less," he said after the brouhaha. "The jury can come out at the end of the year. Until then, none of it interest me in the least."

Asked whether his fellow players shared that view, he replied: "I'd imagine if you asked 20 different guys, you'd get 20 different opinions."

Prior to the post-game histrionics, Giovinco put down another plank in his MVP platform.

The Italian star now has 19 goals in 28 games in his debut MLS season, moving him incredibly into second place in TFC's career MLS goal-scoring list behind Dwayne De Rosario (28 goals, 76 games). Giovinco's 14 assists are also a team record, one of several club marks he already holds.

Military Appreciation Day, which drew 19,692 to BMO Field, started with sunshine but turned grey and very wet in the second half as sheets of rain billowed in off Lake Ontario.

Giovinco, a one-man wrecking crew, had worked his magic by then. He came out in the 84th minute to a standing ovation from those fans still left in the stands.

Dillon Powers scored for Colorado (8-11-10), which is now winless in three. The Rapids' road record dropped to 3-6-5 with a league-low nine goals away from home.

"Today we got beat by the best player in the league who is firing on all cylinders and really on both those goals we could have done better," said Rapids coach Pablo Mastroeni. "Some interesting decisions to say the least as they marched eighty yards down the field. It was one tough decision after the next but I think the response in the second half was fantastic."

The game was the first of five straight at home before Toronto closes out the regular season in Montreal.