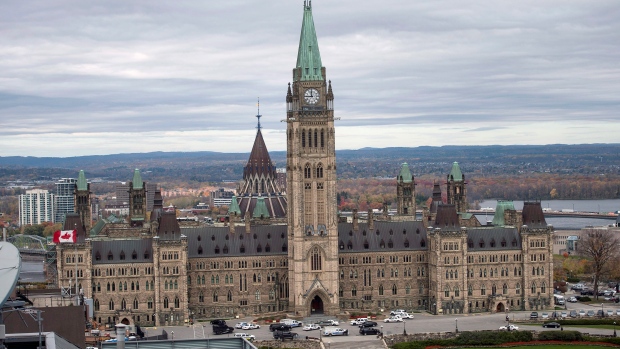 OTTAWA - Tonight's NHL game between the Ottawa Senators and the Toronto Maple Leafs has been postponed following the shootings on Parliament Hill.

The NHL says the date and time of the rescheduled game will be announced at a later date.

"We are shocked and deeply saddened by today's tragic events on Parliament Hill and in downtown Ottawa," said Senators owner Eugene Melnyk in a statement. "Our collective thoughts and prayers are with the families of the victims as well as with all Members of Parliament and staff who have had to manage through today's difficult circumstances.

"Hockey is certainly secondary to these types of tragic events and we know our fans stand alongside us with the league's decision to postpone tonight's game."

A gunman opened fire this morning, killing a soldier at the National War Memorial before injuring a security guard on Parliament Hill, where he was reportedly shot dead by Parliament's sergeant-at-arms.

The shooting at the memorial was one of three separate shootings in the heart of the nation's capital that forced Parliament Hill into lockdown. Authorities confirmed shots had been fired inside Parliament, at the National War Memorial and near the Rideau Centre shopping mall. The Ottawa Hospital confirmed in a statement that it received three patients, two of which were in stable condition.

In a statement the NHL said it "wishes to express its sympathy and prayers to all affected by the tragic events in Ottawa."

The Leafs, who played the Islanders last night in New York, did not have a morning skate at Canadian Tire Centre.

A spokesman said the team was safe at its hotel, which is not far from Parliament Hill.

"The Toronto Maple Leaf Hockey Club extends its deepest condolences to the family and friends of all affected by the tragic events in downtown Ottawa today," the team said in a statement. "The Club supports the National Hockey League’s decision to postpone tonight’s scheduled meeting with the Ottawa Senators.

"We have been witness today to some terrible events but are thankful to those brave men and women for their tireless service in protecting everyone’s safety."

"Surreal scene outside of our hotel right now," Leafs forward Joffrey Lupul tweeted. "Lot of very brave police officers we should all be very proud of."

The Senators skated at Canadian Tire Centre, which is located about 30 minutes outside of the downtown core.

In April 2013, the NHL postponed a game between the Bruins and Senators after the Boston Marathon bombing. Those teams played the game the day after the regular season ended.

On their official Twitter account, the Senators wrote: "Our thoughts are with everyone involved in what is happening on Parliament Hill and Confederation Square this morning. Stay safe, Ottawa."