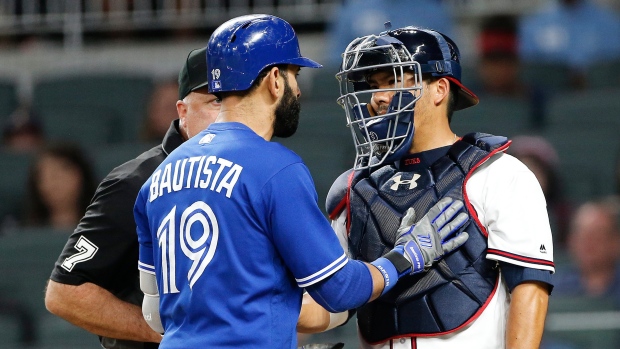 Blue Jays outfielders Kevin Pillar and Jose Bautista expressed regret on Wednesday night for their part in on-field incidents that twice cleared the benches against the Atlanta Braves.

In the top of the seventh inning, Jason Motte struck out Pillar to end the inning. After his swing and miss, Pillar said something to Motte as the pitcher headed for the dugout and despite there being no physical aggression, both benches cleared.

Speaking to reporters after the game, Pillar called the moment "stupid and immature."

"I think it just stems from a little frustration in myself and just the way this series has been going," Pillar told reporters after the game. "Obviously I'm going to do whatever I've got to do to reach out and apologize and let (Motte) know he didn't do anything wrong. It was all me."

In the eighth inning with the Blue Jays down 8-3, Bautista hit a solo home run and flipped his bat after connecting off Eric O'Flaherty. Braves first baseman Jace Peterson said something to Bautista as he rounded the base and the Jays' slugger briefly stopped before continuing toward second. Atlanta catcher Kurt Suzuki also had some words when Bautista arrived at home plate and the two dugouts to emptied once again.

Again, no punches were thrown.

Bautista explained his discussion with Suzuki.

"(I) basically just let them know that I wasn't trying to show up anybody and hopefully it's in the past...it has nothing to do with (frustration) but it was definitely not something that was fitting for the moment," explained Bautista.

O'Flaherty had a more biting analysis of Bautista's actions, referencing his altercation with the Rangers' Rougned Odor in Texas last season.

- with files from Gregor Chisholm of MLB.com