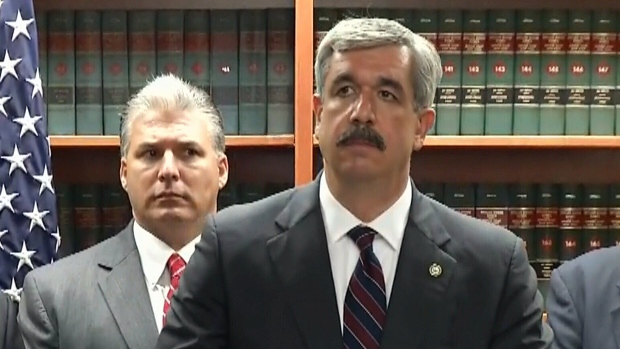 Erie County District Attorney Frank Sedita said during a news conference Friday he's not sure yet how the two-day sideshow of how evidence was handled affects the main case. Sedita said all the evidence, including the rape kit used to examine the accuser, was handled properly and is still in custody of authorities.

"Obviously there has been an effort to create a hoax," Sedita said. "I gotta figure out who was in on that, why they would do that and what it means vis-a-vis all the other evidence."

Sedita said the mother was given the bag at a hospital when her daughter was examined, but it never contained a rape kit. The examining nurse gave the mother the bag after learning the accuser changed her top before going to the hospital, Sedita said. The mother was to put the top in the bag and turn it into authorities, but never did, Sedita said.

The mother did not immediately respond to a telephone message seeking comment Friday.

Questions about the bag were raised publicly Wednesday by the accuser's former attorney, who abruptly quit the case Thursday night and said he no longer believed the story about how the folded up paper bag — which he'd said had once held the rape kit — was found. Thomas Eoannou said he was still confident in the woman's allegations against Kane. The accuser, in her 20s, says Kane sexually assaulted her at his waterfront mansion outside of Buffalo on Aug. 2.

Kane has not been charged.

Sedita said that the mother was interviewed Friday by investigators from his office and denied ever taking possession of the bag. He said he thought the suspicions were odd when Eoannou raised them because rape kits are stored in boxes, not bags. At his news conference, Sedita showed reporters surveillance video of the rape kit being stored in an evidence room.

The woman's mother declined an interview request Thursday night after Eoannou said he was quitting the case. She referred to a statement the family released to reporters that said they were disappointed the attorney was withdrawing.

"We have every intention of pursuing this case to a just conclusion," the statement said. "It must be emphasized that there exists no evidence or allegation that the accuser herself had any knowledge of the evidence bag until it was brought to Mr. Eoannou's office."

The AP doesn't identify people who may have been sexually assaulted unless they have come forward and voluntarily identified themselves.

Hamburg police chief Gregory Wickett said Friday that an officer who went the mother's home the day she went to the hospital saw the bag, but didn't take it and put the clothing requested by the nurse in a different bag instead.

Sedita said he doesn't think the mother did anything illegal because it's not illegal to lie to her daughter's lawyer and she wasn't under oath when interviewed by his office.

The criminal investigation into the sexual assault allegation against Kane continues, Sedita said, adding that it could be affected if investigators determine the accuser was aware of the alleged hoax.

Otherwise, "the child is usually not guilty of the sins perpetrated by the parents," he said.

At one point earlier this month, prosecutors were scheduled to present the case to a grand jury but postponed the proceedings, a person familiar with the investigation told to The Associated Press. The person did not provide a reason for the postponement, and spoke on condition of anonymity because Sedita and Hamburg police had not revealed any details of the case.

Kane's attorney, Paul Cambria, has said that none of Kane's DNA was found on the woman "from the waist down."