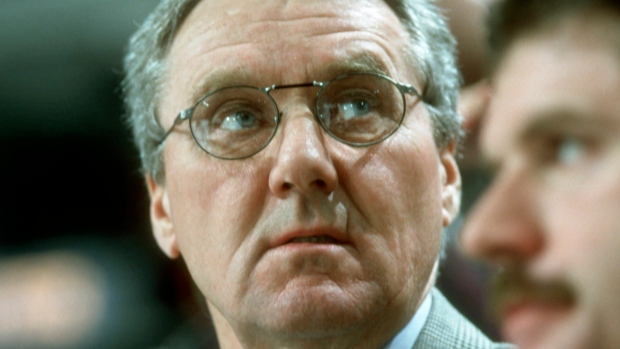 Sunday was the 35th anniversary of Team USA's remarkable victory over the Soviet Union; Tuesday marks the date when the Americans actually won the gold medal over Finland at the 1980 Winter Olympics in Lake Placid; both forever to be remembered simply as the Miracle on Ice.

So - like many on this occasion, I'm sure - it gets me to thinking of the late, great American coach Herb Brooks, who emerged as the iconic figure in arguably the biggest upset in hockey history.

Herb died on Aug. 11, 2003. He was presumed to have fallen asleep at the wheel of his vehicle. He wasn't wearing a seat belt, resulting in the fatal crash. He was 66. If it seems hard to believe the Miracle on Ice was 35 years ago, it's even more difficult to realize we have been without Herbie for almost 12 years, that he would be 77 if he were still with us.

As anniversaries go, I'm much more likely to take note of this Wednesday, which is 13 years to the day I last spoke with Herb Brooks. That, of course, would also mean tomorrow is the 13th anniversary of Team USA, coached by Brooks, losing to Team Canada 5-2 in the gold-medal game of the 2002 Salt Lake City Winter Olympics.

For me, those 2002 Winter Olympics started with a whimsical story - the memory of which still makes me laugh and one I later got to share with Herb - and ended with another story that turned out to be one of the most poignant moments of my life as a hockey reporter.

Then TSN colleagues and fast friends Gord Miller, Pierre McGuire and I were en route to Salt Lake City from Toronto. Our connecting flight from Denver to Salt Lake was delayed because all air traffic into the Olympic venue was grounded while the President and Air Force One got in and out for the Opening Ceremonies.

So Gord, Pierre and I posted up in the Denver airport lounge, got ourselves a few adult beverages and, with many others in the jam-packed lounge, watched the Opening Ceremony on TV.

There was one seemingly well refreshed patron sitting at the bar who stood out for a variety of reasons. He wore a big cowboy hat, cowboy boots and had a big dinner plate belt buckle. His booming voice could be heard throughout the lounge.

The Olympic parade of nations had begun on TV, the volume was turned up loud and there was intermittent clapping or cheering for particular nations when they were introduced. It was actually a pretty cool experience; the vibe there was neat.

Up on the TV screen, a red, white and blue flag appeared. It had a large, solitary white star on it. Suddenly, the guy at the bar jumped off his stool, started hooting and hollering, waving his big cowboy hat. Just as he finished whooping it up, the TV announcer said: Chile. I even recall how the announcer pronounced it: Chill-LAY.

The big Texan was absolutely crushed. "Awww," he said in his drawl, "I thought that was us."

Gord, Pierre and I cracked up; it still makes me laugh - Texas in the Winter Olympics.

Herb Brooks thought that story was hilarious when I told him. The only thing Herb loved more than hearing a good story was telling one. And, boy, could Herb tell a story. His face was so expressive. He was so animated. His eyes would light up, he would get his hands going and he wouldn't hesitate to spice it up with some salty language. He could be funny, profane, profound and earnest, effortlessly switching gears from one to another.

Which, by the way, reminds me of another legendary Herb Brooks story. It was during the 1991-92 season, when Herb was coaching the Utica Devils, New Jersey's American League farm team.

The Devils were trailing by one goal in the final minute of a road game. Herb called timeout, pulled the goalie for an extra attacker and addressed his players. According to some of his players, it apparently went like this and there was no diagramming of plays for Herb: OK, here's the plan. We're going to beat these guys, then we're going to eat their food, drink their booze and (expletive deleted) their women, but if we don't tie the game here and then win it, we can't eat their food, we can't drink their booze and we can't (expletive deleted) their women, so let's go, let's get that goal...

Anyway, back to Salt Lake City.

It was the day after the Olympics had ended, the day after Brooks' Americans had lost 5-2 to Pat Quinn's Canadians, ruining what would have been the story-book finish on the 22nd anniversary of the Miracle on Ice.

Gord, Pierre and I were flying back home to Toronto. We'd been warned the post-Olympic airport exodus would be chaotic. We'd been told to check in at least four hours before our flight. We were all checked in, had time to kill, so once again we posted up to an airport bar/restaurant.

Herb Brooks, like us, had hours until his flight, happened by the bar and joined us for lunch and drinks. We spent the better part of the next few hours eating, drinking, telling stories, and sharing laughs. My goodness, we laughed. It was one of those moments in your life where at the very moment it was happening, you knew it was something special and it always would be. It was nothing that could ever have been arranged or set up to be that good, that special; it just sort of happened.

Not long after we sat down with Herb, I had to do a radio interview with Jim Van Horne in Toronto. I did it on my cell phone while sitting at the table. Funny enough, Jim started to ask me about some controversial comments made by Herb Brooks prior to the gold-medal game, where Brooks reportedly described the way Team Canada played as "stupid."

"Playing that (dump and chase) style is their style, their philosophy in Canada," Brooks had been quoted as saying. "They like that style. I think the game is a little more profound than that. I think the ability of the players can allow them to do so much more. If you look at football, basketball and football, possession is the name of the game. It seems kind of stupid to me to work hard to get the puck and then say, 'I'm going to give it back to you,' and then you try to get it back again. That's going to be (Canada's) style on this rink, the small rink or out in the parking lot."

When Van Horne asked me about Brooks' comments, I said, "Well, Jim, it just so happens Herb Brooks is sitting here with me right now, I'll put him on and you can ask him."

Brooks took my phone and did an amazing interview with Jim.

The whole afternoon was incredible.

Eventually, many laughs and drinks later, Herb had to go his way; we had to go ours. We said our goodbyes and just as Gord, Pierre and I were about to depart, Herb pulled me aside, and delivered a most solemn, serious and sincere message. Herb told me I had a unique (media) platform in hockey, that I had a voice and opportunity to wield tremendous influence but that I should never forget that also comes with great responsibility. He told me I should use my voice to be progressive, to do right by the game, protect the game, celebrate the game, put the game of hockey above all else because it's such a great game but it can be so much better than it is.

Then he shook my hand, patted me on the back and walked away.

It was the last time we ever spoke. Seventeen months later, he was dead.

When I heard the terrible news of his passing, I thought back fondly to that wonderful day in the Salt Lake City airport. Just as I do this week, now that there's occasion to celebrate the Miracle on Ice, to say nothing of the life and times of Herb Brooks and his bold and progressive vision of how he believed the game should be played.