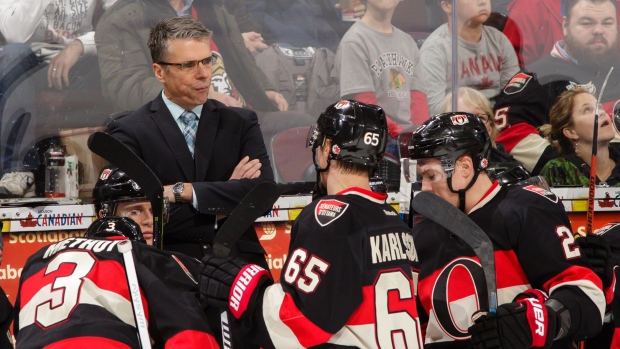 It's the second major change in Ottawa after the Senators finished a disappointing 38-35-9 season and missed the playoffs.

Dorion is wasting no time shaking up his coaching staff, with the changes coming just two days after he took over the GM role from Bryan Murray.

Assistant coaches Andre Tourigny and Rick Wamsley were also fired. Assistant Jason Smith was relieved of his coaching duties and offered another position with the organization.

Button: Crawford would be an excellent choice for Ottawa

TSN's Craig Button joined Dean Millard to look around the NHL and ahead to the NHL Playoffs.

The Senators made an improbable run to the post-season under Cameron, qualifying for the playoffs in their final regular-season game. Ottawa finished 23-4-4 over its final 31 games, making up a 14 point deficit.

After taking the favoured Montreal Canadiens to six games in the first round of the 2014-'15 playoffs, the Senators were expected to build on their success and repeat as a playoff team this season. Instead, the Senators were plagued by injuries and inconsistent play and took a significant step back.

While Ottawa was the last Canadian team to be eliminated from the 2015-'16 playoffs, they were not considered a serious threat to make the post-season.

Cameron was hired by Senators on June 23, 2011 and spent three-plus years as an assistant coach before replacing MacLean.

It was Cameron's second stint with the Senators organization. He previously coached the American Hockey League's Binghamton Senators for three seasons (2004-'07).

He coached in the Ontario Hockey League for 10 seasons with Sault Ste. Marie and Toronto/Mississauga.