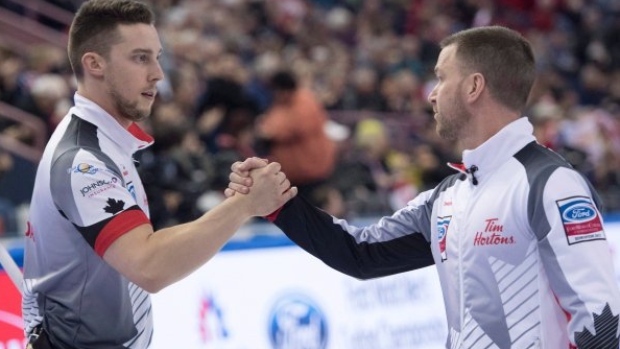 His team rebounded from a rough first day in Las Vegas with a 7-2 win over Switzerland's Mark Pfister on Sunday.

Olympic silver medallist Niklas Edin of Sweden topped the standings at 4-0 ahead of Norway's Steffen Walstad and South Korea's ChangMin Kim, both at 3-0.

The Canadians were tied at 2-1 with Scotland's Bruce Mouat and China's Dejia Zou. Canada has a single game Monday afternoon against Italy's Joel Retornaz (1-2).

Gushue wasn't pleased with ice or game-clock management in a loss to Scotland the previous night when he was down to 30 seconds on his final throw.

"The most important thing is for us to start to feel comfortable out there," Gushue said. "I don't think we're there yet, but that was certainly a good step forward.

"We do have to embrace the challenges that are going to be in front of us if they don't change."

Gushue says the Orleans Arena ice continues to run slow and straight, particularly when a stone is thrown down a fresh path.

"You have to take that time to discuss the different paths and figure out what the speed is," he explained. "If you jump in the hack and throw it and expect it to be the same as another path, you're going to look silly.

"Certainly I think if we go a 10-end game against one of the top teams here, we're going to be tight (for time) come the end of it unless conditions change.

"This is the slowest ice we've played on in I'm going to say, maybe five or six years for sure."

They had the morning and afternoon draws off Sunday before facing the Swiss at night.

The skip said it was a needed break after almost a dozen hours at the rink the previous day for the opening ceremonies followed by two draining games.

"I was pretty pissed last night," Gushue said. "I woke up this morning, we went down to the pool with our families and that was forgotten about once we woke up.

"Last night, I was not a happy camper, but we're good. Losses happen."

Time spent in the sun at the pool is about more tanning, Gushue says. The skip was sidelined about half of the 2016-17 season with a hip injury.

Heat keeps him limber to play in a cold rink. He says he and Walker are sometimes in the hotel hot tub twice a day at events to soak various nagging injuries.

"Heat is a good thing," Gushue said. "On the way to the way to the rink today, I felt much looser than I did yesterday as far as all my muscles, especially my hip area.

"Let's face it, we're probably the oldest team out here so we need all that stuff."

Canada scored two with hammer in the first and fourth ends, stole a deuce in the second and a single in the fifth en route to a 7-1 lead against the Swiss, who shook hands after six.

In other games Sunday night, the Swedes edged the Scots 7-6, the Russians fell 9-6 to the Italians and China got by Germany 6-5.

The top six teams make the playoffs at the conclusion of the preliminary round Friday. The top two teams earn byes to Saturday's semifinals while third through sixth square off in quarterfinals earlier that day.

Walker and Crocker finished second in the event two years ago, but since Walker was otherwise occupied with Gushue's team in Las Vegas, Muyres subbed in.

Crocker and Walker are getting married in May, so time at the pool is a little about tanning, Gushue said.

"I've got to get a little colour," the skip said. "We're going to Mexico and I'm pretty pasty."