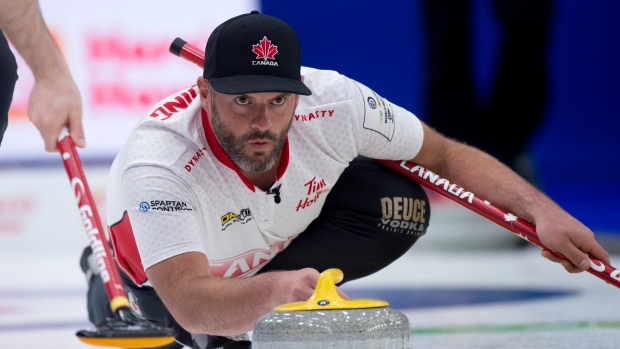 With Team Brad Gushue and Team Jennifer Jones winning the Tim Hortons Curling Trials in November, the pursuit for the 2026 Winter Olympics in Milan and Cortina d'Ampezzo, Italy has officially begun.

Over the next couple months, some of Canada's best curlers will be step away from their current teams for a new opportunity while others might want time away from the game or even retire, leaving a spot open. Some teams might think their current lineup has run its course and a full shakeup is necessary.

One thing is for certain: the Canadian curling landscape will look much different when spring rolls around.

Keep up to date with all of curling's lineup changes with TSN.ca's roster tracker.

Three days before Christmas, the 39-year-old announced he was joining Team James Grattan out of New Brunswick and will get the chance to qualify for the 2022 Tim Hortons Brier in Lethbridge. Moulding was expected to be there with the reigning Brier champs as Team Canada, but needed to find a different path after getting cut. It's safe to say the icemaker is motivated.

"For me the focus is to get another spot to Lethbridge," Moulding told the Canadian Press. "That's the motivation for me personally is to win this spot a second time. Getting to the Brier is really hard. I expect it to be a grind and a challenge and that's what I'm looking for."

I am so excited to start this ride with @TeamGrattan !

Grattan, 47, has represented the Maritime province at 13 Canadian championships, including winning a pair of bronze medals in 1997 and 2002. Recently, Grattan has been competitive at the Brier, but not a playoff team. The addition of Moulding has the potential to get them over the hump if they can find their chemistry quickly.

"He is a tremendous person and a teammate that has proven to make the great players around him even greater," Team Grattan said.

Team Grattan will be the favourites to win the New Brunswick Tankard, slated to run from Feb. 9-13 in Miramichi.

McDonald, 35, skipped his Kingston rink to victory at the 2019 Ontario Tankard to qualify for his first Brier. McDonald then filled in at skip for Nova Scotia's Jamie Murphy at last year's bubble Brier.

Lyburn, 46, was an alternate at the 2012 Brier for Manitoba's Rob Fowler, his lone appearance at the Canadian championship.

The Manitoba provincial playdowns run from Jan. 25-30 in Selkirk.