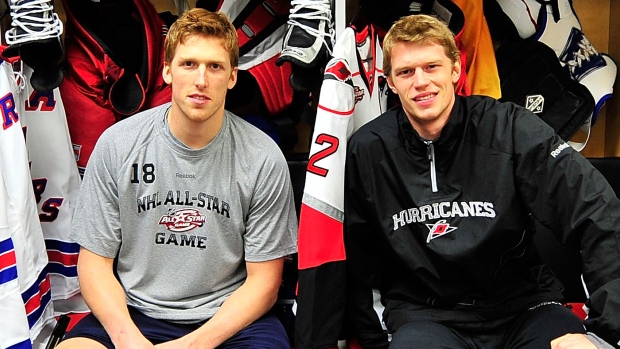 Who knew winning could be so complicated for the Carolina Hurricanes?

Tuesday night's victory over the Philadelphia Flyers leaves the Canes a mere three points out of a playoff spot, though the Pittsburgh Penguins have three games ‎in hand on Carolina while sitting in the final Wild Card position.

The point is, the Canes are in a race. With as many games remaining as there are, anything could still happen. They could actually be a playoff team. They just as easily could fall out of it.

Right now, though, the Canes are playing pretty well, better than most anybody could have imagined. Jordan Staal and Jeff Skinner have re-discovered their games in a big way. Even on nights when the team doesn't play really well, like Tuesday night against the Flyers, rejuvenated netminder Cam Ward bails them out and they manufacture a W.

Bobby Mac discusses Habs players that are in play and if Eric Staal could be on the move during NHL trade deadline week.

Which, for an organization that hasn't been in the playoffs since 2009, is damn fine stuff.

Except, of course, when it comes to deciding on how to handle the Eric Staal situation.

The captain is an unrestricted free agent this summer. The widely-held assumption this season was that Carolina wouldn't be very good and that Staal, if prepared to waive his no-trade clause, might fetch a first-round pick and a good prospect on the rental market at the deadline so his $9.5 million salary and $8.25 million cap hit could be reallocated in future years to a new generation of Canes.

But winning has complicated that. Being in a playoff race has muddled the vision.

Had the Canes lost Tuesday night, Philadelphia and New Jersey would have been ahead of them in the standings. The Canes would have been five points out, with two teams to climb over just to get to the Penguins, who have all those games in hand.

Maybe, just maybe, a loss on Tuesday would have been enough for GM Ron Francis to call in his captain and ask him if he's prepared to waive his NTC.

And maybe, whether it's today or tomorrow or one of the days before Monday's trade deadline, Francis will still ask Staal to waive.

But if the Canes keep winning, well - it gets even more complicated, doesn't it?

If the Canes win more than they lose between now and Monday, can Francis ask Staal to waive and, if Staal agrees, trade a front-line player out of a contending lineup for future considerations?

Can he actually do that?

Would he actually do that?

McKenzie: Half the league has interest in Drouin

TSN hockey insider, Bob McKenzie joins the show to preview the NHL trade deadline. He touches on the Oilers, Jonathan Drouin, interest from the Leafs, and the top prospects for this years draft.

All Staal can do is wait and think about his options if Francis asks him to waive. Last week in Ottawa, Staal said he wouldn't be crushed if ‎it's time to move on, but don't kid yourself: Staal's first preference is to stay in Carolina. The lack of a contract extension offer and being in limbo land is clearly wearing on him.

Those who know Staal believe last week's uncharacteristic quotable moment on his future in Carolina was rooted largely in frustration.

Begrudgingly, if asked, Staal may be prepared to move on by Monday. But full no-move and no-trade clauses allow him to be highly selective and engineer the landing spot of his choice.

Of course, if the Canes keep winning, it may all become a moot point.

THE HIGH RENT(AL) DISTRICT AND THE BLUESHIRTS

The New York Rangers know they shouldn't be in the high-rent(al) district at this trade deadline, but I'll be curious to see if they can resist the temptation.

The Rangers haven't had a first-round pick since 2012 and they don't have one this year either. Anthony Duclair, a third-round pick who developed like a first-rounder, was sacrificed‎ last year to get Keith Yandle, who is now an expiring contract who can't/won't be re-signed in New York.

Tuesday night's poor effort against New Jersey notwithstanding, the Rangers have played well enough over the last couple of months to not want to shop Yandle in the rental market in an effort to recoup some future considerations. They surely must think they still have a shot; that contending in the East is something they can still see if they squint a bit and don't look too closely in Washington's direction.

But the Rangers also haven’t played so well as to think they're just one notable player away to continue throwing caution to the wind and loading up the mortgage even more. Their current deadline philosophy calls for more cautious spending of lower-level future assets than first-rounders or blue-chip prospects. Or maybe they would consider moving a younger roster player. That is, if they're to add a piece at the deadline‎ - the operative word being if.

But you know how it is when you're in debt. The temptation is always there to go a little deeper. You know, in for a dime, in for a dollar.

It's true that his cap hit of $8.25 million and actual salary of $9.5 million is not insignificant for cap-challenged contenders. But if Carolina wants to maximize its yield on a Staal trade and get that primo pick and/or prospect, the Canes will almost assuredly have to retain significant salary.

But the Rangers do know two things: 1) Eric Staal could help them in their bid not only this season but for the next few years were he to sign there as a free agent, and, 2) they have on their roster a defenceman who goes by the name of Marc Staal.

Eric has enjoyed playing alongside brother Jordan in Carolina. One would have to presume he ‎would feel the same way about playing with other brother Marc. Perhaps that gives the Rangers an advantage no other NHL team has.

Now, the Rangers still can't afford to be cavalier about flushing draft picks and/or prospects for a thirtysomething forward. But what if Eric Staal weren't a rental? What if his Brotherly Love cap hit-discount, in a place like New York, was deep enough for the Rangers to consider him a longer-term option and not just a one-and-done rental?

Would that make a difference?

There’s so many moving parts on this one on all sides - Carolina's and the acquiring team - but do remember that for UFA rentals at the deadline, one move now is often times preferable to one now and another on July 1.