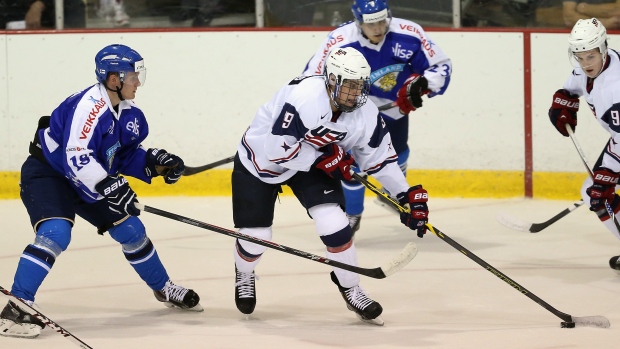 Auston Matthews is the clear cut favourite to be selected first overall in the 2016 NHL Draft.

Previous drafts have offered either/or options: Taylor or Tyler in 2010. Nathan or Seth in 2013, and this year, Mac or Jack. No such scenario exists yet for 2016. If you don’t know the runaway frontrunner to go No. 1, here is a primer. For this week's TSN Hockey List, check out the other ranked talents in the same draft class with Matthews - many of whom are playing this week at the 2014 World Under-17 Challenge in Sarnia, Ontario.

Matthews is far and away the best 2016 prospect. He faced off against 2015 top uber-prospect Jack Eichel on Oct. 18 in a game vs. Boston University and the two played a game of  “whatever you can do, I can do better.”  Each finished with two goals and one assist.

Representing Team Canada (Black) at the World Under-17 Challenge, Clague is an exceptionally smart defenseman who combines vision and creativity to be dangerous anywhere on the ice. Outstanding puck skills and the puck moves to advantageous positions. Great anticipation and is a catalyst in transition.

An injury has prevented him from participating at this year's World Under-17s. But Jakub is a player with smarts, skills and power. He can use any of them to impact the game depending on the requirements.

Has played 10 games in the Finnish Elite League. A big, rangy winger with the ability to score. He's not a one-dimensional scorer and is capable of setting up goals as well as finishing them. Gets himself into dangerous spots and has a shot that can beat goalies.

A great athlete who has excellent skating ability and can move in any direction to support the offence or negate opponents. He makes good plays with the puck and has a physical element where he can be a challenge to get around, but also will eliminate opponents with strong physical play.

A well-rounded centre who's playing at the World Under-17s and can play in every situation. Has the smarts, the skills and the competitiveness to make a difference through all areas of the game. Has a style of play that reminds me of how Hall-of-Famer Bryan Trottier performed.

Big, strong, skilled and able to impact the game with all of those elements. A smart player with and without the puck and his impact is positive in any type of game. Very difficult to deter because he can skate past an opponent or power past one.

Excellent skater with speed, quickness and agility and he uses all of those elements to be constantly dangerous. He’s elusive and very hard to ’trap’ and with a sense, awareness and poise he’s able to be a consistent threat with the puck.

Steel, who's playing for Team Canada (Black) at the World Under-17 Challenge, is an outstanding skater who uses well in so many ways. His speed is threatening and he knows how to use it to keep defenders off balance. He’s quick and able to get free in tight spots. Smart and makes good plays at high speed so a difficult player to keep in check.

Great confidence playing and he initiates the play from a defensive aspect and in transition also. Given an opening, he will take it but is very adept at understanding what play is available to him and adjusting accordingly. An all situations player who wants to make a difference.

Combining speed and power along with a very good skill level, he becomes a very challenging player to play against. He uses all of the elements to his advantage and has a determination in his game that forces opponents out of their comfort zone.

Dynamic skating defenceman who will push the pace and jump into the attack. Good awareness and makes good plays from the defensive zone and in the offensive zone and plays with confidence.

Poised and smart, he may not ‘catch your eye’ with flash but he knows where his options are. He doesn’t panic under pressure and he can make plays that alleviate pressure defensively or apply it offensively.

A good skating center who can be a solid offensive contributor. Smart, good puck skills and very difficult to deter because he makes his size work to his advantage. Can make plays in tight or on the rush, and can start them or finish them.

He's a very smart player who is capable of seeing opportunity and taking advantage. A rarity in that he can score goals off the wing or make plays off the wing. Gets involved physically and is a determined competitor who uses well in multiple areas.

At times you watch him score and you see glimpses of his 500-plus NHL goal scoring father, Keith. He cans score in multiple ways; from out with a good shot or in tight with quick hands. He gets to scoring position and reads play well and plays with an assertiveness to make a difference.