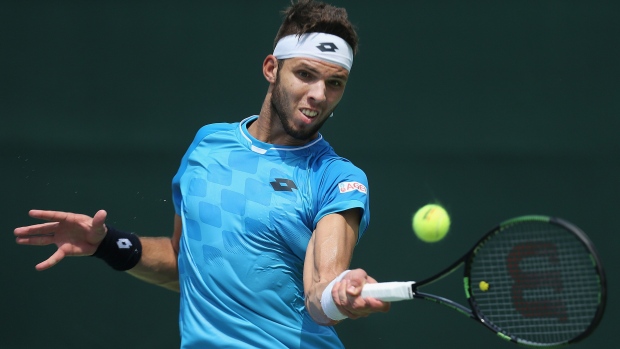 VIENNA - Ivo Karlovic added 17 aces to his all-time record total while defeating Andreas Seppi of Italy 7-6 (5), 6-3 in the first round of the Erste Bank Open on Monday.

The seventh-seeded Croat held serve throughout and broke Seppi at 3-2 in the second set for the only break in the match. Karlovic has now hit 10,306 aces in his career.

Earlier, Jiri Vesely of Czech Republic defeated Austrian wildcard entry Gerald Melzer 6-4, 6-3. The 40th-ranked Vesely dropped serve once in the opening set on the only break point he faced. He will next play second-seeded Kevin Anderson or Andreas Haider-Maurer of Austria.

The 522nd-ranked Miedler appeared in his first main-draw match on ATP level.

David Ferrer of Spain is the top-seeded player at the 41st edition of the Austrian indoor event.