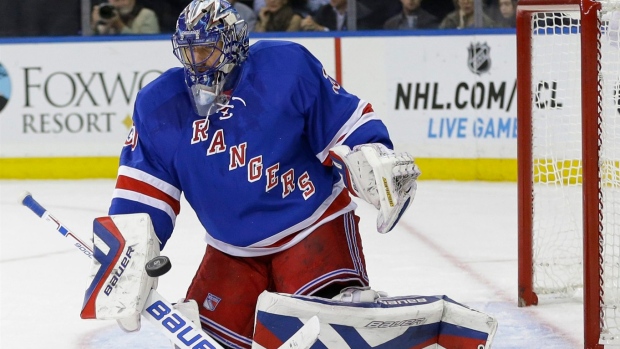 If there’s one area in hockey analytics that’s lagging behind, it’s primarily in the realm of goaltender studies. Outside of multi-year even-strength save percentage – which, of course, requires a goaltender to face thousands of shots over a series of seasons – there simply isn’t a ton to measure a goaltender’s true talent level.

While save percentage is a decent metric over longer samples, it’s subject to the same, wild fluctuations that shooting percentage experiences in smaller ones. For one brief example, consider quickly the below table of six goaltenders around the league:

One of the things that clouds smaller sample save percentages, aside from random variance, is fluctuation in a team’s ability to prevent shooters from generating shot-attempts in scoring chance areas. This is particularly important, because we know shot distance correlates well with shooting percentage. Shot distance (as a proxy for “shot quality”) may pale in importance compared to territorial control in today’s National Hockey League, but it still holds a sliver of importance. And, since team effects aren’t equal across all thirty teams, it is data worth considering.

Over at War on Ice, Andrew Thomas has started to compile save percentages for goaltenders adjusted based on the quality of the shots they have seen. His adjustments weight the likelihood of every shot against becoming a goal against based on the distance of said shot. Thus, his adjusted save percentage both captures the goaltender’s ability to stop shots, and the possibility that certain goaltenders simply face shots of varying difficulty due to team effects. The adjustments are fairly small, but in some cases, important.

For example, if a goaltender stops 92% of shots he’s faced, is he playing well? Generally, the answer is yes. But what if he went through a three-week stretch where opposing teams haven’t been able to muster much in the scoring chance department? Is that 92% number still good? Is it possible that 92% is underwhelming, failing to meet expectations?

Click here for a graphical representation of the above chart.

At the poles, we can see a few notable goalies who see a fairly significant reduction or bump based on the shot distance of opposing shooters. The two most interesting goalies at the bottom, to me, are Craig Anderson and Tuukka Rask. Craig Anderson (.963 EVSV%, .954 aEVSV%) has been absolutely stellar for Ottawa, but maybe a small reason why the Senators have been piling up wins despite poor possession numbers is that their starting goaltender has seen slightly easier than expected shots against. Tuukka Rask (.914 EVSV%, .904 aEVSV%) is notable for another reason entirely – he’s struggled for Boston in the early going, but it’s not because he’s facing particularly difficult shots. Rask’s been one of the best goaltenders in the league for a long time and this is almost certainly a blip on the radar but, based on this, it’s possible he’s been even a bit worse than initially thought.

On the other side, we see the polar opposite of Tuukka Rask in Henrik Lundqvist. Lundqvist (.916 EVSV%, .926 aEVSV%) has also seemed to struggle in the early parts of the season, but he sees a nice little bump in his adjusted percentages because the shots he’s faced have come from in-tight. Cam Ward (.889 EVSV%, .900 aEVSV%) has seen his percentages sliding for years now, and I think skepticism about his game is warranted at this point. But, here’s one data point in his favor – Carolina wasn’t particularly kind as a team to Ward, and he ends up with the most favorable adjustment in save percentage of any goalie in the league. Still, it should be noted that Ward’s adjusted save percentage doesn’t speak highly of him as a goalie.

Adjusted save percentage is far from the singular data-point every hockey executive wants, but it is another tool in the tool belt – one that will help us just a bit in contextualizing goaltender performance.