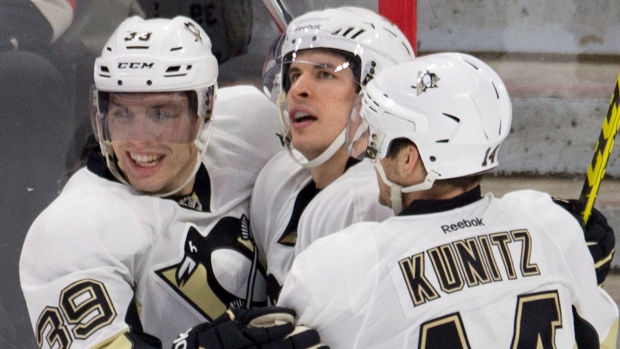 The thought of the Pittsburgh Penguins missing the playoffs – despite its mathematical improbability – has the hockey world unhinged. More than anything else, I think there’s just general amazement that such a talented team hasn’t locked in a playoff berth. With that comes unease, and of course, trying to find a scapegoat for the disappointment.

When a team faults late, usually the guns are aimed at the team’s most prominent players – especially so if the counting numbers (like raw points, for example) have disappeared. This creates a perfect storm of potential criticism for Sidney Crosby, should Pittsburgh miss. Such criticism would be woefully misguided.

There’s truth to the argument that Sidney Crosby’s not having his best year. We hold him to ‘Best Player in the World’ standards, and when he’s not lapping the field, we panic. His point scoring this year has quietly slipped, and it’s particularly noticeable at even-strength. A quick table showing his EV per-game scoring gives us an idea of what we are dealing with:

Crosby has a couple of injury-shortened seasons in there, so be aware of possible data distortions. But, the overarching point holds – he’s just not scoring a lot this season, and despite it still being considered elite, his point production still falls below Crosby-esque standards.

The question with Crosby is why the scoring has dropped off. Sometimes, an individual player’s shot rate will dry up, meaning fewer chances to score goals and/or rack up rebound assists. Sometimes, it’s a team-level problem – the player has trouble generating shots for his teammates, and/or his team in general has a problem getting into and sustaining pressure in the offensive zone. Fewer shots, fewer goals, fewer points to go around.

Let’s look at Sidney Crosby’s 2010-2014 performance for a moment. In those years, 7.70% was the average on-ice shooting percentage at even-strength. If you pull out all of the regular forwards and isolate for forwards who were at least two standard deviations (or, the 97th percentile) better than the league average, this is the group you end up with:

Individually, all of these names make sense. Sidney Crosby, Steven Stamkos, Martin St. Louis (Stamkos’ running mate for years), and Jamie Benn are all elite NHL talents. Two of Kyle Palmieri’s most frequent linemates were Ryan Getzlaf and Corey Perry, Alex Tanguay is an established great individual shooter, and Chris Kunitz played a bunch of his minutes with Sidney Crosby. Most important to this piece, Crosby and his linemates scored on 11.17% of their shots on goal for years. It’s a big reason why he (and his linemates) have been impossible to defend.

This year? His on-ice shooting percentage has indiscriminately crashed to around the league average at 8.04%. This is a comically low number for Crosby, and explains – to a large degree, anyway – why Crosby’s scoring rates seem so pedestrian. A reasonable bet would be to expect his on-ice shooting percentage to regress towards career norms over the next x games, and the scoring to return.

If you’re curious as to whether or not Sidney Crosby’s random on-ice shooting percentage nosedive is one of the big reasons why Pittsburgh’s still trying to clinch a playoff berth in April, the quick answer is yes. The team has historically relied heavily upon Crosby’s unparalleled playmaking and scoring ability to carry the offense. It dried up for a stretch in 2014-2015, and no one’s picked up the slack.

Our guess was correct. Sidney Crosby posted great on-ice shooting percentages with or without the player in question. The player, on the other hand, was wholly dependent on Sidney Crosby to carry those great percentages. Without him, they all sat near the league average.

What about 2014-2015? We know Sidney Crosby’s numbers have taken a weird crash. Has anyone picked up the slack in the percentage department? We suspect the answer is no.

If Pittsburgh misses the postseason, there’s going to be plenty of blame to go around. I find it hard to fault Sidney Crosby for the team’s struggles of late, though. His possession numbers are absolutely mint, and his team still gets 58% of the goals with him on the ice. He and his teammates just haven’t had the puck luck they’ve grown accustomed to in the last decade, and that’s probably well outside of Crosby and Company’s control.

Here’s the frustrating question I don’t have an answer to if I’m a Penguins fan: hockey’s the ultimate team sport, and for years, Sidney Crosby has been the mega-bandaid over a swath of team issues. When the pucks briefly stopped bouncing in Sidney Crosby’s favour, who stepped up?

That’s one question I don’t have an answer to.