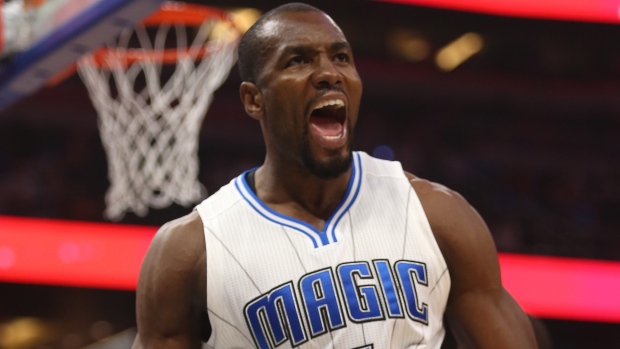 TORONTO — The Toronto Raptors were cartwheeling down the Eastern Conference standings, and a sense of unease had seeped into the dressing room.

Team president Masai Ujiri made a big splash Tuesday to try to get the club back on track by reeling in Serge Ibaka from the Orlando Magic, acquiring a player he's long coveted and filling a void at the power forward position. The Raptors gave up Terrence Ross and a first-round pick in the 2017 draft in exchange for the pivotal big man.

According to a report from Adrian Wojnarowski of Yahoo Sports, that pick will be the later of their two, 2017 first-rounders.

.@Raptors have acquired Serge Ibaka from Orlando in exchange for Terrence Ross and a future first-round draft pick. #WeTheNorth

Toronto will send lower of its two first-round picks to Orlando in 2017, league sources tell @TheVertical. Toronto has the Clippers' pick.

"He's definitely one of a kind when it comes to rim protection, being able to score in the post, and also space the floor as well," Raptors guard DeMar DeRozan said at the team's morning shootaround in Chicago. "Sucks to see (Terrence) go, but now we've got to make this new adjustment with a great new addition."

The Raptors confirmed the deal late Tuesday afternoon. Ibaka was expected to fly to Toronto on Tuesday evening and, depending on how long his physical takes, could be in uniform Wednesday when the Raptors host Charlotte.

"Some people say parts of his game have changed, he's become a really good shooter," Ujiri said at an evening press conference. "But I've know this guy for years, he's a helluva competitor, he brings playoff experience, he's played in the NBA Finals before. Everyone knows who Serge is, he's a warrior. Every time he steps on the court he competes.

"He'll give us good rim protection, he's a good defender and I think he can play multiple positions too, which will help us."

The move came with the Raptors mired in their worst slump in two seasons. Entering Tuesday night's game against the Bulls, the Raptors had dropped 10 of their last 14 games to slip from second to fifth in the Eastern Conference standings.

Ujiri said the move had nothing to do with comments made in frustration by Lowry and DeRozan, and in fact "it almost hurt me when I was negotiating," the team president said, laughing.

In Ibaka, a chiselled six-foot-10 power forward, the Raptors get a versatile player who can knock down shots and provide a huge presence in the paint.

"I think he's a great addition to any team and especially to ours where we can add some shot-blocking, some outside shooting, some inside toughness, some athleticism, running up and down the floor," Lowry said in Chicago. "I think he's going to be a guy who can take some pressure off of me and DeMar."

Selected 24th overall by Seattle in the 2008 draft, Ibaka played seven seasons alongside Kevin Durant and Russell Westbrook in Oklahoma City before being acquired by the Magic last summer. Ibaka should provide a big boost to Toronto's defence — the Raptors rank 17th in the NBA in defensive efficiency.

Ibaka is averaging 15.1 points, 6.8 rebounds and 1.6 blocks a game this season, and fits the hole at power forward Ujiri had hoped Jared Sullinger — who's been injured most of the season — would fill. And at just 27, Ibaka fits in nicely with Toronto's young core of Lowry, DeRozan and Jonas Valanciunas.

Ujiri first spotted Ibaka at the African junior championships. He was coaching Nigeria and Ibaka was on the Congolese team.

"That was the first time I set eyes on him, he had 20 points and 20 rebounds, and I'll never forget: I was like, how can a guy have 20 rebounds playing that level of basketball? But he did.

"And then with Basketball Without Borders and all this stuff over the years he's been a friend. He's a great kid and always admired him as a person and a basketball player and I'm glad to bring someone like that into our culture and our basketball team."

DeRozan admitted to a sense of excitement at shootaround.

"Yeah, but with that comes a new challenge of catching on quick," DeRozan said. "Which shouldn't be a problem, but it's something new. It's an adjustment for everybody, trying to make everything comfortable as quick as possible."

The Raptors will hope to re-sign Ibaka when he becomes a free agent this summer. The deal came just over a week before the Feb. 23 NBA trade deadline and is the Raptors' first trade in nearly 20 months.

Ibaka was born in the Democratic Republic of Congo, but represents Spain in international basketball. He's the third youngest of 18 kids.

Ross, who was selected by Toronto with the eighth overall pick in the 2012 draft, is in the first year of a US$31-million, three-year contract. His departure will open up playing time for Norman Powell, who has been solid despite limited minutes.

Ross, who's averaging 10.4 points a game this season, will be remembered for his 51-point performance against the Los Angeles Lakers in 2014. But he was a streaky shooter who struggled in the Raptors' last three playoff series.

Ross posted on Twitter: "Toronto thank you for all the memories, thanks to the amazing fans. Couldn't of been drafted to a better city. Thanks to my team. All luv."

Lowry posted a photo of the two players on Instagram shortly after the trade news broke.

"Watched you grow from a young ROOK, to a young vet!! Keep growing T! Love you man!! #toughbusiness," Lowry said.