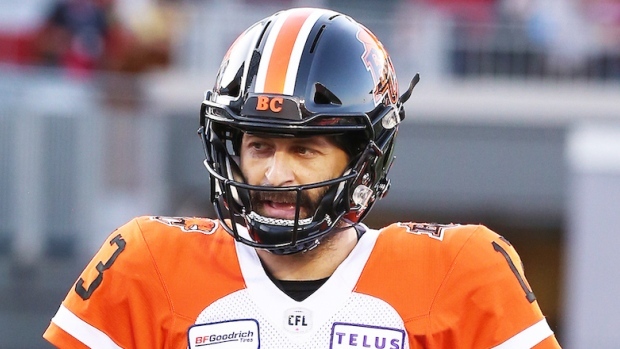 VANCOUVER — The B.C. Lions have reached a settlement with marquee quarterback Mike Reilly.

The club announced the news in a statement Thursday, saying Reilly has signed a new deal that will keep him in B.C. through the 2022 season.

News emerged last month that the 35-year-old native of Kennewick, Wash., had filed a grievance against the Lions, allegedly over the nonpayment of guaranteed funds.

Lalji notes that Reilly was due over $700,000 in each of the next two seasons in the original deal, but will actually make more when you factor in the grievance and the net tax effect of his large signing bonus.

Reilly was due 725k & 750k for 2021 & 2022 in his original deal. When you factor in the grievance and the net tax effect of his large signing bonus he will actually come out ahead for those 2 years. Will get over 600k before he plays his next game. @CFLonTSN @TSN1040 @TSN_Sports

The 2015 Grey Cup MVP signed a four-year, $2.9-million deal with B.C. as a free agent in February 2019 following six seasons with the Edmonton Eskimos.

In a statement Thursday, Reilly said he is "beyond excited" to continue preparing for the 2021 season and "have all that business stuff behind us."

“Entering this offseason, I haven’t been this healthy since before I became a starter. So that part is great," Reilly said in a statement Thursday. "I think I speak for everybody with the Lions -- players, coaches and fans -- when I say I can’t wait to get back out there and compete for the Grey Cup.”

This report by The Canadian Press was first published Dec. 17, 2020.