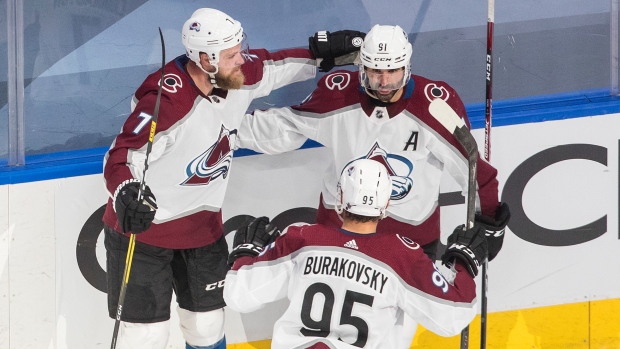 EDMONTON — Nazem Kadri scored the go-ahead goal with 6:06 remaining in a wild third period as the Colorado Avalanche regrouped to beat the Dallas Stars 6-4 in Game 3 on Wednesday night and pull to 2-1 during their second-round series.

Leading 3-1 in the third, Colorado saw the Stars rally for three straight goals, including one that caromed into the net off the leg of Jamie Benn to put Dallas up.

Mikko Rantanen and Kadri responded with goals 1:52 apart to give the Avalanche back a 5-4 advantage. Kadri tipped in the winner off a pass from Kevin Connauton.

Pierre-Edouard Bellemare added a late empty-netter to seal the win. It was his first playoff goal.

Game 4 will be Friday.

Nathan MacKinnon had two assists to give him at least a point in all 11 post-season games for Colorado. It’s the longest points streak to begin a post-season in franchise history, breaking a tie with Joe Sakic (1996) and Marian Stastny (1982).

The Avalanche received some secondary scoring with goals from someone not named MacKinnon. The speedy MacKinnon leads the post-season in points (seven goals, 13 assists).

Denis Gurianov, Blake Comeau and Benn scored in the third as Dallas nearly pulled off another comeback win. Tyler Seguin had a goal in first period for the Stars, who had their five-game winning streak halted.

Zadorov and Burakovsky scored 3:41 apart in the second period to give the Avalanche a 2-1 lead. Cale Makar did his best MacKinnon impression to set up the third goal, flying into the zone and making a nifty move that Khudobin knocked away. Landeskog was there to put in the rebound.

Zadorov was knocked into the boards during the second period and didn’t take another shift.

Seguin scored the first goal of the game in the opening period on a pass by Jamie Benn from behind the net. Miro Heiskanen also had an assist on the play, giving him 15 points for the playoffs.

Colorado held a meeting Tuesday to try and get back on track. Something clicked.

“There are twists and turns to (the playoffs). There are ups and downs,” coach Jared Bednar said. “The team that wins is the team that’s mentally strong and can adapt and overome things put in their path.”

The Avalanche remain without No. 1 goaltender Philipp Grubauer and defenceman Erik Johnson due to undisclosed ailments. Forward Matt Calvert was a scratch as well with an injury. Calvert has yet to play in the series.