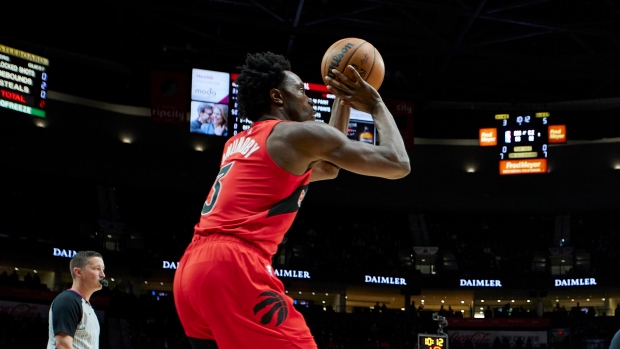 TORONTO – It was inevitable.

The Raptors did what they could. They got vaccinated, they followed masking guidelines, and they amped up their internal protocols over these past few weeks. They did it all in the hopes of staving off another team-wide COVID-19 outbreak, and for a while it seemed to be working.

As case counts soared throughout the NBA, Toronto was one of the last teams to get hit. A season ago, the Raptors went mostly unscathed until just before the all-star break, but when it hit, it hit hard. Here they are again.

Shortly before Saturday’s home game against Golden State, Pascal Siakam and Dalano Banton were placed into the league’s health and safety protocols. Since then, five others have followed in three different waves. Gary Trent Jr. entered the protocols on Monday afternoon. Fred VanVleet and Malachi Flynn joined them on Tuesday. Scottie Barnes and Precious Achiuwa were added a few hours later.

The news is hardly surprising, given the rate in which the Omicron variant is spreading – not just in professional sports, but around the world – as well as the club’s recent schedule, and the league’s approach to this spike in cases.

The NBA has been reluctant to postpone games, and even less willing to consider the type of hiatus that put the 2019-20 season on hold at the onset of the pandemic. For obvious financially driven reasons, their strong preference is to keep the train moving. It’s not quite by any means necessary, at least not yet – fortunately, they haven’t adopted the NFL’s ‘ignorance is bliss’ approach, in only testing symptomatic players. Instead, they’ve approved a hardship exception, which allows teams to temporarily replace players lost to the COVID protocols. We’ll call it ‘the show must go on’ approach.

“[We have] no plans right now to pause the season,” Commissioner Adam Silver told ESPN on Tuesday. “We’ve of course looked at all the options, but frankly we’re having trouble coming up with what the logic would be behind pausing right now. As we look through these cases literally ripping through the country right now, putting aside the rest of the world, I think we’re finding ourselves where we sort of knew we were going to get to for the past several months. This virus will not be eradicated, and we’re going to have to learn how to live with it and I think that’s what we’re experiencing in the league right now.”

So, with a bare-bones group of healthy players, coaches and staff, the Raptors flew to Chicago ahead of Wednesday’s scheduled game against the Bulls, which – as of Tuesday night – is still on track to be played.

The seven players in the protocols were held back in Toronto. For those who tested positive, which may well be all seven, they’ll be required to self-isolate and be away from the team for at least 10 days. Additionally, the Raptors are without their two-way players – Justin Champagnie has a non-COVID illness and David Johnson is still dealing with a calf strain – and Goran Dragic is back home in Slovenia after being excused from the team.

So, if everything goes according to plan – and this hasn’t exactly been the week for that – the Raptors could have up to nine guys available against the Bulls: six regular roster players (OG Anunoby, Yuta Watanabe, Svi Mykhailiuk, Chris Boucher, Isaac Bonga, and Khem Birch, who is listed as questionable) and five replacement players (reported to be guards Brandon Goodwin and Tremont Waters, forwards Juwan Morgan and D.J. Wilson, and Canadian sharpshooter Nik Stauskas). The five G Leaguers are expected to meet the team in the Chicago, and assuming they pass their physicals and COVID screening, they’ll be signed to hardship 10-day contracts.

There aren’t a lot of good reasons for this game to be played.

To mitigate the risk of further exposure and spread, the Raptors have decided not to hold team practices each of the last three days. Instead, players have been coming into OVO Centre separately for individual workouts with assistant coaches. However, the entire team practiced together on Thursday and Friday of last week. VanVleet, Barnes, Trent, Achiuwa and Flynn each logged at least 15 minutes in Saturday’s win over Golden State. Siakam and Banton were in the building until being sent home 30 minutes before tip-off. They’ve all come into contact with the players who are still testing negative and it’s reasonable to think that some of those guys might not be negative tomorrow, or the day after that.

A depleted roster also comes with an increased risk of injury. Anunoby has only been back for one game after missing 13 contests with a hip pointer. Birch is dealing with lingering knee swelling and hasn’t played in nearly a month. Is it worth overextending either of them to try and pull off an unlikely mid-season win?

As for the quality of the game itself, Toronto will be playing without four of its five starters, six of its top-seven scorers, and all six guards on the roster. We’re probably not in store for an all-time classic.

The Bulls are recovering from their COVID outbreak earlier this month. While they still have five players in the protocols, including Zach LaVine, they’ve also started to get some guys back, most notably their leading scorer and former Raptor DeMar DeRozan.

At 19-10, Chicago comes in with the second-best record in the Eastern Conference, having won a couple straight games since its previous two were postponed, including last Thursday’s scheduled trip to Toronto.

In total, seven games have been postponed this season, each of them over the past week, but it’s unclear how the league is making its determinations. Last season, they followed the letter of the law: if a team could dress eight guys they had to play, if they couldn’t then they did not. It didn’t always seem fair – like when the Raptors, and several other teams, were forced to play without several key rotation players – but at least it was consistent. This year, some teams have been granted mercy – like the Bulls, who had eight available players when last Tuesday’s game against Detroit was postponed – and some haven’t.

Under the circumstances, exposure was unavoidable. Over the past 10 days, the Raptors have faced three teams currently dealing with outbreaks of their own: New York, Sacramento and Brooklyn. There’s no way of knowing whether the Raptors’ outbreak started on the basketball court, while travelling, in the community, or some place else.

Still, as yet another team scrambles to find enough players to piece together an active roster, the NBA has to own its part in this. Although the Knicks and Kings didn’t start reporting cases until after their games against Toronto, the Nets had seven players in the protocol heading into last Tuesday’s contest, including two who tested positive a half-hour before tip-off. Kevin Durant logged 48 minutes in what turned out to be an overtime win for Brooklyn and, to little surprise, tested positive a few days later. How was that game not postponed?

There are no easy answers. The NBA is a business, first and foremost. They’re already trying to recoup losses from the previous shutdown and are desperately, and transparently, hoping to make it through Christmas Day. Almost all of the players would prefer to trudge forward as well. More than 97 per cent of the league is fully vaccinated. These are young men in prime physical shape, and most of the players who have had the virus reported only minor symptoms.

For some, that’s where the argument in favour of charging ahead at all cost begins and ends, but it’s bigger than that. Even if a player is fully vaccinated, even if they’re asymptomatic and have no lingering or long-term effects, they can still pass the virus to somebody who is less equipped to fight it off. Maybe it’s a fan. Maybe it’s a team or arena employee. Maybe it’s a loved one. The NBA isn’t just responsible for protecting its players.

Instead, they’ll see how far they can push the envelope. Now, it’s replacement players. Soon, it’ll be replacement players for the replacement players. Earlier this week, the league passed the triple-digit mark for players entering the COVID protocols, with all but 16 of those additions coming over the last 20 days. In other words, more than 20 per cent of the NBA’s players have either tested positive or been a close contact of a positive case this month. At this rate, there’s no telling how high that number will climb by the time the pandemic forces the league’s hand once again.

The NBA prefers not to postpone games and plans to play out the rest of the season, but if there’s one thing we’ve all learned over the past two years it’s that the virus doesn’t care about our preferences or our plans.