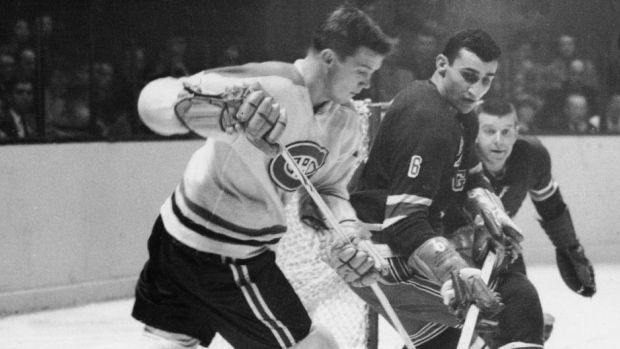 Ralph Backstrom, who won six Stanley Cup championships with the Montreal Canadiens during a 17-year NHL career, had a severe form of chronic traumatic encephalopathy (CTE), a degenerative brain disease that has been discovered in athletes, military veterans, and others with a history of repeated hits to the head.

Backstrom’s wife, Janet, confirmed his posthumous diagnosis. Backstrom died Feb. 7, 2021, at the age of 83 in his home in Windsor, Colo.

After donating his brain to researchers at Boston University, Backstrom’s family was contacted in October with exam results showing he had stage 3 CTE. (There are four stages.)

“Ralph would have been proud of this research to know that even after he died, he could be helping others by increasing our knowledge about CTE," Janet Backstrom said in an interview with TSN. "This is now part of Ralph's legacy."

A copy of Backstrom’s two-page neuropathology report documents that he also suffered from Lewy body disease. People with Lewy body often suffer from short-term memory loss associated with Alzheimer’s and can struggle to navigate complex tasks like grocery shopping.

Backstrom’s posthumous diagnosis of CTE is noteworthy because he was known as a scorer and playmaker, not as a particularly belligerent player. His career high for penalty minutes in a season was 51.

Researchers believe CTE not only comes from concussions that might be suffered during a fight on the ice, but also from the repeated blows to the head and jarring body checks that occur routinely during a game.

“This is significant because it draws attention to the fact that former players who were known as skill players are being diagnosed with CTE,” said Chris Nowinski, the co-founder and chief executive of the Concussion Legacy Foundation. “This goes beyond fighters and big hitters.”

CTE can only be diagnosed posthumously. The degenerative brain disease is linked to symptoms like personality changes, memory loss and impulsive outbursts.

Janet Backstrom said her family was unanimous in its support to donate Ralph’s brain to Boston University researchers.

“The news Ralph had CTE helps us understand why he was suffering the way he was with his memory function,” Janet said. “It was devastating on him."

Janet said she married Ralph in 1985. He was working at the time as a coach for The University of Denver.

"Ralph made me so happy, he made me laugh every day," Janet said. “He didn’t like to talk a lot about the hits that he took playing in the NHL. I remember him going to the doctor to have some sinus work done and the doctor asked him how many times he had his nose broken. Ralph answered, ‘Oh, maybe once.’ The doctor laughed and said, ‘No way. You’ve had your nose broken at least 16 times.’”

Backstrom, who won the Calder Trophy as NHL Rookie of the Year in 1959, recorded five 20-goal seasons with the Canadiens and two more with the Los Angeles Kings.

He played in six NHL and four WHA All-Star Games, helped the Canadiens capture the Stanley Cup in back-to-back seasons on three different occasions, and played in a combined 1,336 career regular-season games in the NHL and World Hockey Association, collecting 378 goals and 514 assists.

Apart from his contribution to Montreal’s Stanley Cups, Backstrom’s impact on the Original Six franchise was felt long after Canadiens general manager Sam Pollock traded him to Los Angeles on Jan. 26, 1971.

Pollock had previously acquired the California Golden Seals’ first pick in the 1971 draft and the deal with L.A. was intended to ensure California finished last overall, so Montreal would have the right to pick first and choose one of Guy Lafleur or Marcel Dionne.

Pollock’s strategy worked. Backstrom scored 14 goals and added 13 assists in 33 games with the Kings, who went from last place to fifth in the NHL’s West Division, passing California in the process.

Of the 14 former NHL players whose brains have been studied by researchers, 13 have been found to have had CTE.

Nowinski said BU researchers are currently studying the brains of several other former NHL players. An NHL spokesman did not respond to a request for comment.

Nowinski said there have been advances in the science around CTE in recent years and “if the science breaks right, hopefully we’re five years from being able to diagnose the disease in living people.”

Once that happens, researchers would be able to begin medical trials to learn whether certain drugs are effective at slowing or stopping the damage caused by CTE.

Nowinski said he’s observed a stark difference in the approach taken by the National Football League and NHL when it comes to the science of CTE.

“The NFL acknowledges that playing football causes CTE and the NHL does not acknowledge that playing hockey causes CTE even though it’s very clear that it does,” he said. “It’s an absurd denial. I wonder if the NHL’s refusal has slowed down the engagement of hockey players on this issue. That said, I’m having conversations with leaders in the hockey community, and I hope this is the year more hockey people will come to the table on this.”

Boston University is home to the largest brain bank in the U.S. devoted to researching CTE. The school’s CTE Center has now collected 1,250 donated brains and is receiving three to five new brain donations every week, Dr. Ann McKee, a neuropathologist and the CTE Center’s director, said in an interview.

For the past several years, BU researchers have requested families to donate the eyes and spinal columns as well as brains of their loved ones.

Spinal columns are being used to study a possible link between CTE and amyotrophic lateral sclerosis, also known as ALS, or Lou Gehrig’s Disease, a degenerative nervous system disorder that causes the loss of muscle control.

While Dr. McKee said she had hoped that donated eyes might be used to help identify CTE in the living because the eyes are connected to the brain, she said that specific research is “slower going.”

Like Nowinski, Dr. McKee said she was disappointed that the NHL has not publicly acknowledged a link between playing hockey and long-term cognitive disorders.

“It’s avoidance that shows a lack of a humane response to former players, but it’s not unexpected,” Dr. McKee said. “The bottom line in sports is the most important thing for team owners. Acknowledging a link would open the league to more lawsuits and settlements with former players.”

The NHL in November of 2018 announced an $18.9 million (U.S.) settlement with 318 former players who joined a lawsuit accusing the league of downplaying the long-term dangers of repeated brain trauma.