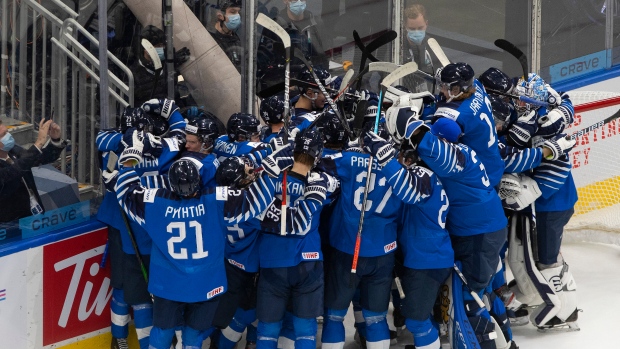 EDMONTON — Captain Anton Lundell had a pair of goals, and Finland held on to beat Russia 4-1 and claim bronze at the world junior hockey championship on Tuesday.

Ilya Safonov found the back of the net for Russia. Yaroslav Askarov stopped 28-of-30 shots.

It's just the second time in 11 tournaments that Russia — which last won gold in 2011 and grabbed silver last year — will finish off the podium.

Later, the Canadians play the United States for gold. Canada is attempting to repeat as tournament champions. The Americans placed sixth in 2020.

Safonov tucked in a rebound 6:03 into the game to open the scoring for Russia.

Lundell deflected a point shot from the top of the crease 5:05 into the second to tie the game.

Another tipped goal, this time twice and eventually credited to Pettman, gave Finland its first lead of the contest less than two minutes into the third period.

Russian captain Vasili Podkolzin took a four-minute penalty for cutting Finnish forward Matias Mantykivi with a high stick with 6:45 remaining that could have been a dagger. But Russia killed off the extended Finnish power play and pushed for the tie.

Lundell and Parssinen, however, secured the victory with empty-net goals.