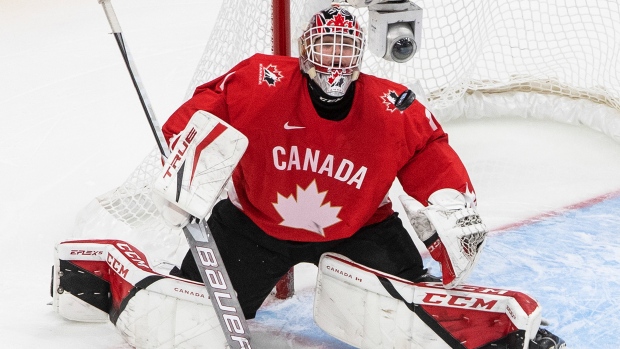 For Devon Levi, the memory of a heartbreaking loss to Russia at the 2019 World Junior A Challenge has come full circle.

"That was a tough day and it hasn't left my mind since," Levi said of the double-overtime defeat as Canada East fell to Russia. "Getting revenge on them was lucky, but I feel like it was meant to be."

Levi made 27 saves to pick up his second consecutive shutout and Dylan Cozens picked up a goal and two assists to add to his team lead in points as Team Canada blanked Team Russia 5-0 in their semifinal on Monday to advance to the final at the 2021 IIHF World Junior Hockey Championship in Edmonton.

Levi posted back-to-back shutouts after helping his team to a 3-0 win over the Czech Republic in the quarter-finals on Saturday. He has three shutouts for the tournament and ties the World Juniors record set by Justin Pogge in 2006.

He didn't know it at the time, but the performance at the Junior A tournament, in which he was named tournament MVP, set him up for his invite to Canada's World Junior camp.

Now he's just one win away from helping Canada win back-to-back World Juniors for the first time since winning five tournaments in a row from 2005-09.

"I feel like I've been repeating myself, but he's really assertive," Canada head coach Andre Tourigny said of Levi. "He's really confident for us, we're glad to have him on our side."

Yarsolav Askarov was busy in goal but struggled to gain control against the high-flying Canadians. He made 30 saves in the loss.

The Canadians attacked early and often. Newhook, who returned after missing his team's win over the Czech Republic in the quarter-finals, opened the scoring. Initially thought to have hit the post, IIHF officials blew the play dead to review the shot. The puck hit the back post on the inside of the net and Canada had a 1-0 lead just 59 seconds into the game. Schneider and Jack Quinn pick up the assists.

"I thought it was just straight crossbar and out," Newhook said of the goal. "After seeing the video after it was a good feeling for sure."

Later in the period, Askarov lost his stick while defending a Canadian attack and they took full advantage. Jakob Pelletier's pass found McMichael with a partially-empty net to give Canada a 2-0 lead. Cozens picks up the secondary assist at 10:33.

Canada capped the opening frame by scoring on a power-play goal. Perfetti's shot beat Askarov above his pad and under his glove cleanly from the right circle for a 3-0 lead. Bowen Byram and Cozens pick up assists at 15:05.

The Canadians outshot the Russians 16-7 in the first period.

Stick control issues continued to plague Askarov. He'd lose the paddle again on a Canadian attack and they made it 4-0 when Schneider connected on a partially-empty net. Ryan Suzuki and Dawson Mercer picked up the assists at 4:09.

"He's our main goalie and we trust him and he's been playing really good hockey for us," Larionov said of Askarov. "I guess sometimes that happens."

Late in the period, Russia appeared to have capitalized on the power play when Mikhail Abramov beat Levi at 17:37, but Canada challenged the play for offside and the goal was overturned.

"You know what, that was a good goal," Larionov said of the tally. "That goal could have made a big difference for us in the game."

After Russia pulled their goalie with under three minutes left in regulation, Cozens scored an empty-netter at 18:31 to make it 5-0. Pelletier picked up his second assist of the game.

Cozens' one goal and two assists gave the product of Whitehorse, Yukon, a team-leading 16 points for the tournament. He was also awarded a penalty shot late in the second period after he was hacked on the shoulder while on a breakaway. Askarov made a toe save on Cozens' attempt.

While Russia generated some scoring chances at times, Canada's pre-scouting of Askarov's glove side and their ability to limit the Russians' attacking game to the perimeter ultimately helped them advance.

"We knew really well how they generate their offence from behind the net, in the faceoff zone and neutral zone and how they were doing it," Tourigny said. "And we knew how to attack their zone and their net."

Canada has yet to trail at any point in the tournament. They will face the United States in Tuesday’s gold-medal game (TSN Network, 8:30pm et/5:30pm pt).