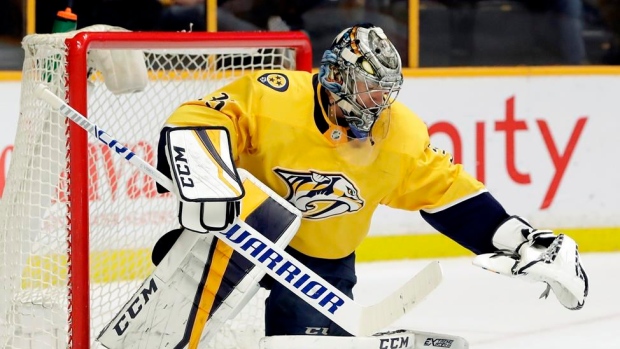 The Nashville Predators will retire Pekka Rinne's No. 35 on Feb. 24, 2022 at Bridgestone Arena ahead of that night's game against the Dallas Stars.

Rinne played his entire 683-game NHL career in Nashville and will be the first player in franchise history to have his jersey retired.

The 39-year-old, who retired on July 13, is the franchise leader in several goaltending categories, including games played, wins (369), goals-against average (2.43), shutouts (60) and saves (17,627). He also owns the most games played, wins and shutouts records by a Finnish goaltender in NHL history.

"As the face of the Predators for more than 15 years, it is only right that the first number to be retired in franchise history is Pekka Rinne's," Predators general manager David Poile said. "He is one of, if not the, primary reasons our franchise has grown into what it is today. It's going to be an incredibly special night not only for Pekka, his family and friends, but for our entire organization. Our congratulations go out to Pekka, his fiancée Erika, son Paulus and the entire Rinne family on this well-deserved honor. We can't wait to see No. 35 go up into the Bridgestone Arena rafters and share the moment with our fans on Feb. 24."

Originally drafted by the Predators in the eighth round (258th overall) at the 2004 NHL Draft, Rinne won the 2018 Vezina Trophy and was a finalist three times. A four-time NHL All-Star, he was voted to the year-end All-Star Teams twice. In his final NHL season, he took home the 2021 King Clancy Memorial Trophy.

"After playing my first game with the Nashville Predators in 2005, I could have never dreamed that my jersey would be retired 16 years later," Rinne said. "It's the ultimate recognition for an individual player. I'm very grateful for the Predators organization and the City of Nashville. I cannot wait to celebrate that moment with my family, friends, teammates, coaches, staff and the fans at Bridgestone Arena."