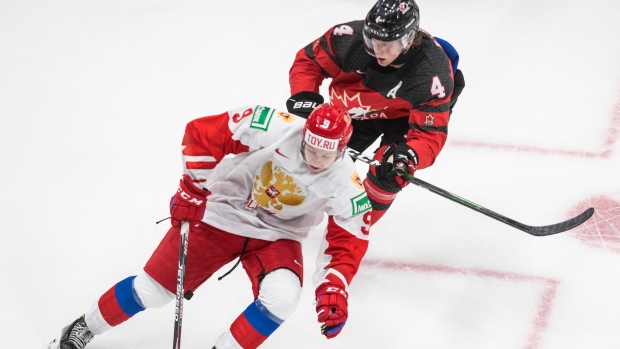 The IIHF disciplinary panel has suspended two players, Russia's Mikhail Abramov and Germany's Justin Volek, for the upcoming quarterfinal matchup between the two teams on Jan. 2.

Abramov was issued a one-game suspension for slew-footing. The incident occurred during the second period of Russia' preliminary round game against Sweden on Dec. 30 when Abramov slid his right skate into the right skate of Sweden's Arvid Cosmar with a kicking motion.

The 19-year-old was drafted in the fourth round (115th overall) by the Toronto Maple Leafs at the 2019 NHL Draft. He has two assists in two games at this year's World Juniors.

Volek, 18, was given a one game ban for cross-checking. The German forward cross-checked Swiss defenceman Noah Meier in the neck during the third period of their round robin game on Dec. 30.

He has one assist in four games for the Germans.