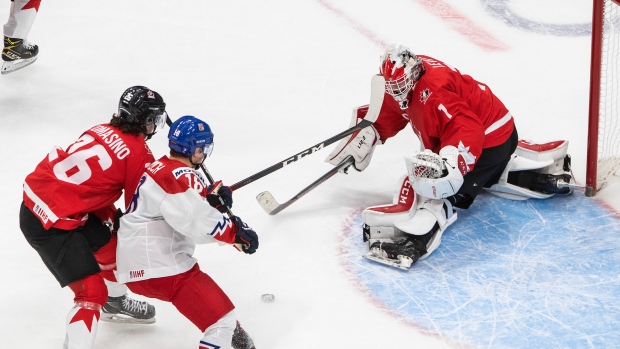 Team Canada goaltender Devon Levi took the net for the start of his team's journey at the 2021 IIHF World Junior Hockey Championship and he has yet to relinquish it.

He had performed well during preliminary games but hadn't been thoroughly tested until the knockout stages on Saturday.

"It's a different type of game," Levi said following his 29-save performance in a 3-0 win over Team Czech Republic. "The past games it was a bit harder to stay focused, I found in this game it was easy to have fun."

Levi picked up his second shutout of the tournament and helped his team advance to the semifinals at the World Juniors. With a talent-loaded roster in front of him, the goaltender from Dollard-Des-Ormeaux, Quebec shined in a situation where he had to be his team's best player.

"He made us play with confidence because we know he's behind us when we need him," Canada head coach Andre Tourigny said.

Dylan Cozens and Connor McMichael each had a goal and an assist for Canada.

Bowen Byram scored the other goal for Canada, who faced a team that played tight defensively and used a counter-attack to generate chances against them.

Nick Malik made 21 saves in defeat for the Czech Republic, who gave Canada their toughest test of the under-20 tournament.

"They really battled and it was tough to win our one-on-one battles," Tourigny said of the Czechs. "They don't have the depth and talent as some of the countries but they have the heart and play hard."

Canada had scored within the opening five minutes in all four of their preliminary games, but it took them until 8:22 of the first period to light the lamp. Cozens broke the deadlock on a breakaway attempt. His shot went off Malik's glove and underneath him until it trickled into the back of the net.

McMichael set up the goal with a flip pass to Cozens, who scored his seventh goal of the tournament.

Byram made it 2-0 Canada when he took advantage of a Cozens screen to beat Malik. Peyton Krebs and Cozens picked up the assists at 11:39.

Cozens has 13 points in five games at the tournament and leads his team in scoring.

The Czechs were effective in providing a counter-attack for stretches of the game. Levi was heavily tested as a result. The Czech Republic outshot Canada 12-8 after the first period.

"They box in really tight and they hit hard," Krebs said of the Czechs. "Out of all of the games they are definitely the hardest-hitting team. I got put on my butt a few times."

The second period was much of the same but without the scoring. Canada continued an aggressive forecheck to start the middle frame. At one point, the Czech Republic were forced to use their timeout following an icing call, a rule permitted in international competition.

The second half of the period saw the Czechs pressure Canada, but Levi was up to the task.

Levi picked up his second shutout of the tournament. Team Canada defeated Team Switzerland 10-0 in preliminary play. He has given up just three goals in the tournament. Two of them were deflections off his teammates.

Canada outshot the Czech Republic 10-6 in the second period.

In the third period, Canada played shutdown hockey and the Czechs appeared to have run out of gas. The Czechs pulled their goalie with just under six minutes to go in regulation time. The Czechs had consistent pressure until McMichael scored an empty-netter at 17:13. Kaiden Guhle and Krebs picked up assists.

NOTE: Canada played the game without forward Alex Newhook, who sat out with an upper-body injury. He remains "day-to-day" according to Tourigny.