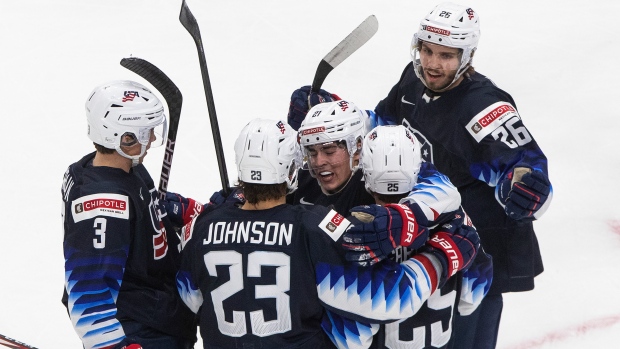 The Americans will face Finland in the semifinals Monday night. Defending champion Canada will play Russia in the other semifinal. In the other quarterfinals, Finland beat Sweden 3-2 on a late goal, Canada topped the Czech Republic 3-0, and Russia beat Germany 2-1.

Knight extended the United States' shutout streak to a tournament-record 218 minutes, 53 seconds before Matej Kaslik broke through with 1:28 left in the second period to cut it to 3-1. After an opening 5-3 loss to Russia, the Americans beat Austria 11-0, the Czech Republic 7-0 and Sweden 4-0 to win Group B.

Arthur Kaliyev, Cole Caufield and Matthew Beniers also scored for the United States. Trevor Zegras had two assists to push his tournament-leading points total to 15. The Boston University star has six goals — one behind Canada's Dylan Cozens — and an event-high nine assists.

Dominik Sojka pulled Slovakia to 3-2 on a power play with 10:10 left in the third, and Farinacci restored the two-goal margin with a wraparound with 4:14 to go. Beniers had an empty-netter.

Simon Latkoczy made 38 saves for Slovakia.