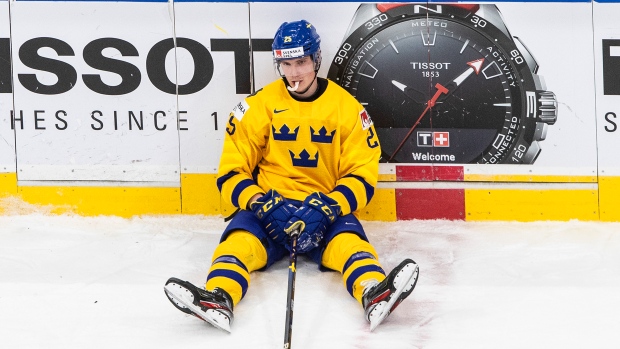 The Americans will face Finland in the semifinals Monday night. Defending champion Canada will play Russia in the other semifinal. In the other quarterfinals, Finland beat Sweden 3-2 on a late goal, Canada topped the Czech Republic 3-0, and Russia beat Germany 2-1.

Knight extended the United States' shutout streak to a tournament-record 218 minutes, 53 seconds before Matej Kaslik broke through with 1:28 left in the second period to cut it to 3-1. After an opening 5-3 loss to Russia, the Americans beat Austria 11-0, the Czech Republic 7-0 and Sweden 4-0 to win Group B.

Arthur Kaliyev, Cole Caufield and Matthew Beniers also scored for the United States. Trevor Zegras had two assists to push his tournament-leading points total to 15. The Boston University star has six goals — one behind Canada's Dylan Cozens — and an event-high nine assists.

Dominik Sojka pulled Slovakia to 3-2 on a power play with 10:10 left in the third, and Farinacci restored the two-goal margin with a wraparound with 4:14 to go. Beniers had an empty-netter.

Simon Latkoczy made 38 saves for Slovakia.

Finland overcame a 2-0 deficit to beat Sweden, tying it on Anton Lundell’s power-play goal with 8:56 left and winning on Roni Hirvonen's wraparound with 25 seconds to go.

Henri Nikkanen pulled Finland within one in the second period, and Kari Piiroinen made 22 saves. Lucas Raymond and Elmer Soderblom had first-period goals for Sweden.

Devon Levi made 29 saves for Canada to shut out the Czech Republic. Cozens had a goal and an assist to push his points total to 13, and Bowen Byram and Connor McMichael also scored.

In the first quarterfinal, Vasili Ponomaryov and Danil Bashkirov scored and Yaroslav Askarov made 18 saves in Russia’s victory over Germany. Florian Elias scored for Germany.