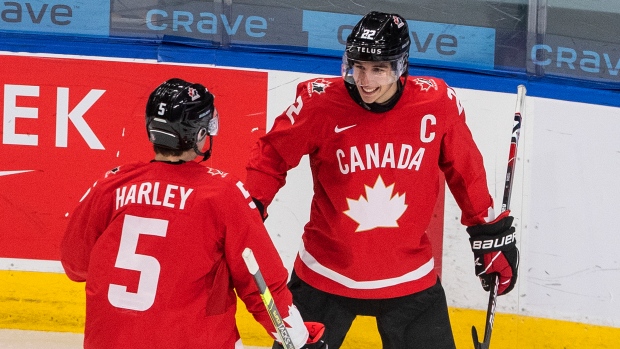 Dylan Cozens leads Team Ca​nada in scoring at the World Juniors and is leading off the ice as well with his calm demeanour. That's a byproduct of being raised by a dad who's a judge and a mom who's a lawyer.

"Both my parents have such stressful jobs so being able to handle the stress and pressure of deciding what happens to someone's life is something that definitely rubbed off on me," the Whitehorse native said.

Cozens is one of six returnin​g players, who helped Canada roll through the quarterfinals and semifinals last year after a big win on New Year's Eve. He's looking for similar success this year starting tonight against the Czech Republic.

"We can't be too confident and we can't think we're going to have an easy win," the Buffalo Sabres first rounder said. "These guys beat the Russians and they play a disciplined game. They clog the middle."

"They block a lot of shots," noted Saginaw Spirit forward Cole Perfetti. "They pack it in in the D zone. They play a really good defensive game. They did that against Russia and wore them out. You got to stick with it."

Perfetti celebrated his 19th birthday yesterday. The team arranged for a cake, but other than that it was "kind of just another day in the bubble," the Winnipeg Jets first rounder said. There was some table tennis, bean-bag toss and college football games on television.

"We're pretty levelheaded," Perfetti said. "We know what we can do, but at the same time we respect our opponents. You want to be confident. It’s good to be confident in yourselves and your teammates and your abilities, but it can be dangerous and a fine line if you get too confident and almost become arrogant or cocky and that can kill a team."

If Canada is able to convert on the power play that will take a lot of the pressure off. The team is 5/15 on the man advantage so far with all five goals coming in blowout wins against Germany and Switzerland. They failed to click in the two closer games against Slovakia and Finland.

"No goals last game, but if you look at the momentum we created and the chances we generated, the math and statistics behind it say we should've generated a goal or two," said Perfetti. "The whole point of a power play is to score, but also build momentum and I think we did that."

It's hard to imagine that a top unit featuring Perfetti and Connor McMichael on the flanks, Bowen Byram up top, Peyton Krebs in the middle and Cozens in front can be held off the scoresheet for too long. Cozens and Krebs are playing in unfamiliar positions and slowly getting used to the roles.

Cozens was the last forward on the ice at yesterday's practice going over net-front positioning with assistant coach Michael Dyck.

"The biggest thing is just getting those flash screens and standing in front of the goalie as the guy is coming down the half wall and then moving right when he shoots," said Cozens, who played the net-front role at last year's World Juniors, but never in the Western Hockey League. "You have to be a distraction for guys, drawing their D-men down so guys can walk down lower."

Krebs, meanwhile, has been studying video of how Boston's Patrice Bergeron and Tampa's Brayden Point operate in the bumper spot in the NHL. What's he seeing?

"Their ability to find holes," the Winnipeg Ice forward said. "A lot of PKs collapse to the middle and you just got to try to find holes with your stick, maybe not your body, and just open a lane up and even open lanes up for passes to go through you. So trying to do that the best I can and be an option for Perf or Mikes or Bo or whoever needs me."

The Czechs ranked eighth in penalty-kill percentage in the preliminary round allowing six goals on 15 chances.

McMichael led Canada with seven shots against the Finns, but failed to find the back of the net. He came painfully close a few times.

"Mikes had two or three posts on the power play," Perfetti pointed out.

Last year at the World Juniors, McMichael actually called his shot before the semifinal game against Finland telling linemate Ty Dellandrea he was going to "introduce myself to the back bar" before the first shift and then proceeding to open the scoring. This year, his linemate is calling the shot for him.

"He's due," said Cozens. "He had lots of chances last game, a few posts, so tonight he's coming in with a mindset that he's scoring and nobody's stopping him."

Devon Levi posted a .951 save percentage in 11 periods of action in the preliminary round and has remained sharp despite a light workload. Levi has yet to face more than 20 shots in any game.

"It's a tough game, mentally, to play, but I had a lot of practice with that last year," said Levi, who suited up for the Carleton Place Canadians in the Central Canada Hockey League. "I played for a good team and I had to be ready at any given moment for a good scoring chance even though I wasn't facing a lot of shots. But it is harder mentally to stay focused and to be ready rather than getting 40 shots and always being hot."

The Northeastern University freshman has yet to allow an even-strength goal in Edmonton and is confident that his mental strength and visualization technique will help him navigate the added pressure of an elimination game.

Levi, who has deleted all the social media apps from his phone, had a meeting with Hockey Canada mental performance consultant Ryan Hamilton on Friday to talk about his medal-round mindset.

"The main focus is just clearing your mind and breathing during the game and just forgetting about your thoughts," the Florida Panthers seventh rounder said. "It's easy to let your mind wander when you're not facing a lot of shots so just staying focused and concentrating on the puck and breathing helps a lot."