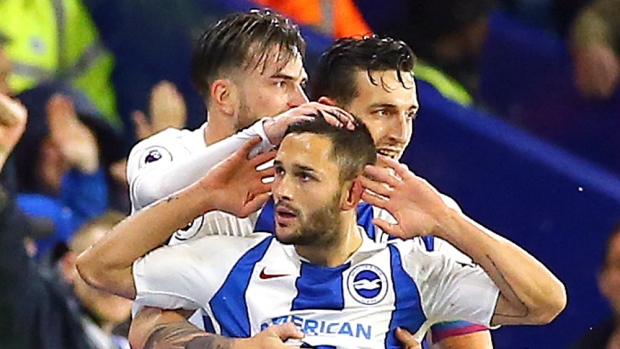 BRIGHTON, England — Brighton shrugged off the first-half dismissal of Shane Duffy to ease to a 3-1 home victory over fierce local rival Crystal Palace in the Premier League on Tuesday.

The centre back was given a straight red card for thrusting his head into Palace defender Patrick van Aanholt in the 28th minute, with Brighton 1-0 ahead at that stage through Glenn Murray's penalty.

Despite being a man down, Brighton stretched its lead to 3-0 thanks to goals by Leon Balogun and Florin Andone before halftime. Balogun, who came on as a substitute following Duffy's dismissal, scored after being on the field for just 25 seconds.

Luka Milivojevic pulled a goal back from the penalty spot after Wilfried Zaha was fouled, but Brighton won for the second time in four days and moved into the league's top 10. Palace stayed only three points above the relegation zone.