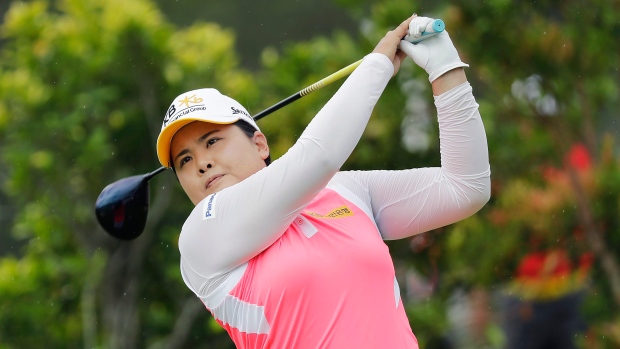 ADELAIDE, Australia — Seven-time major champion Inbee Park moved into contention for her 20th LPGA Tour victory on Friday by taking a share of the second-round lead at the Women's Australian Open.

“It was a little bit more calm this morning, so it was nice to play out there,” said Park, looking for her first win since the 2018 Bank of Hope Founders Cup. “My putting was consistent, like the last couple of days, so it was good. I just love the golf course and the atmosphere here. So, hopefully I can pull it off on the weekend.”

Hamilton's Alena Sharp missed the cut at 3 over.

After an afternoon of misty rain and wind gusts up to 20 mph, Ewart Shadoff joined Park at the top of the leaderboard. Two early bogeys dropped the Englishwoman off the pace, but she rallied with five birdies to grab a share of the 36-hole lead.

“It was a different day today. The wind was obviously a lot stronger, so it was a lot tougher, but I played really steady again,” said Ewart Shadoff, who has two career runner-up finishes, including at the 2017 AIG Women’s British Open. “I didn’t get off to the greatest of starts but I managed to fight back.”

Jillian Hollis (69), was in third place, one stroke behind. Defending champion Nelly Korda (73) was six strokes behind.

Five-time champion Karrie Webb, whose lead-up to the tournament was hampered by a virus, missed the cut after a second consecutive 74.

Because of the virus outbreak in China, the Women's Australian Open will be the last LPGA tournament for a month after the cancellation of three scheduled events in Thailand, Singapore and China.