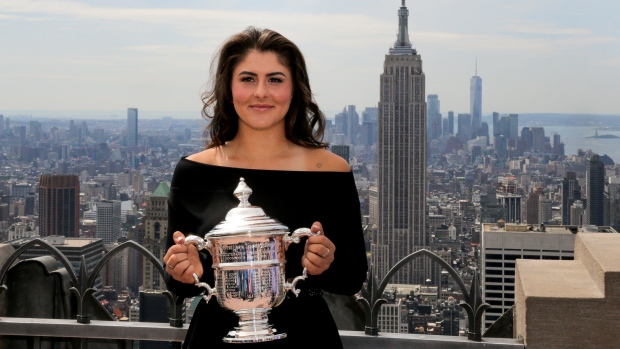 NEW YORK – With the Empire State Building in the background, Bianca Andreescu plotted her tennis empire. A day after winning the US Open, the 19-year-old was already hungry for more.

"At the beginning of the year I wanted to crack the top 100, but I guess I have to start setting my goals a bit higher," Andreescu said after a photo-op on the observation deck at Rockefeller Center, 70 stories up. "Let’s say, top three by the end of the year and, I don’t know, win the WTA Tour Finals."

Andreescu will be No. 5 in Monday's new rankings only 11 points behind last year's US Open champion Naomi Osaka and 197 points back of Elina Svitolina at No. 3. The top eight point-getters this season will qualify for the WTA Finals in Shenzhen and with the title in Flushing Meadows, Andreescu is up to No. 4 in the race for those spots.

Will not be very long before Bibi @Bandreescu_ will be number ☝️ on @WTA tour, number 4 now on live race 🏁 and only 750 points behind number one ☝️ Barty partly, so actually could happen by end of year the way she is dominating 😎💪👊👍🎾🇨🇦 https://t.co/OPL6LTVU1g

After Saturday's win, Andreescu remarked that she has long sought to emulate Serena Williams and now wonders if she can be even better than the 23 time major champion.

"I always say, 'Dream big to get big,'" Andreescu explained, "and I've been like that ever since I was a little kid thanks to my mom. She's my role model so I thank her for that and, yeah, I just want to keep dreaming big, because that’s what helped me get to this point in life."

Andreescu's mom Maria and father Nicu watched proudly as a throng of photographers snapped pictures of the bleary-eyed phenom on Sunday afternoon.

How much sleep did she get after the win?

"That is something I will not answer," Andreescu said with a laugh, "but I made sure to celebrate with my team for sure. We went to a nice dinner."

They toasted the historic triumph with champagne while singing Drake’s "Started at the Bottom," a moment documented on Andreescu’s Instagram account. To be precise, Andreescu opened the season at No. 152 before rocketing up. She's now won 24 straight completed matches with her last loss coming in early March against Sofia Kenin in Acapulco. The only thing to slow her down since has been a shoulder injury, which sidelined Andreescu for all but one match in the clay and grass seasons. Now, she's healthy and making up for lost time.

"It's been pretty hectic," Andreescu said of the aftermath of her US Open win. "I never really got the chance to just soak everything in yet, but hopefully I get the chance today."

The talk-show circuit beckons on Monday before a hero's welcome home expected on Tuesday. It's a life-changing moment, but Andreescu insists she'll take it all in stride.

"That's just me as a person," she explained. "I really don't want to change and I have a really good support team around me. At the end of the day, I’m still human no matter what. I have amazing parents and friends that help me stay grounded."

With a winner's cheque for $3.85-million (US) in her pocket, Andreescu plans to do some shopping on 5th Avenue, but that’s not what she’s most excited about. The woman who inspired the #SheTheNorth hashtag is pumped to head north. Andreescu hasn't done a complete inventory of her phone messages, but has a pretty good sense of just how crazy folks are going.

“I just want to go back home and feel all the good vibes back in Canada," the Mississauga, Ont. native said while talking directly to the cameras, "because I've been getting all your support not only this past tournament, but just throughout this whole year. And, I mean, I've been feeling it on social media, but actually being there to witness and feel it will be something very special."