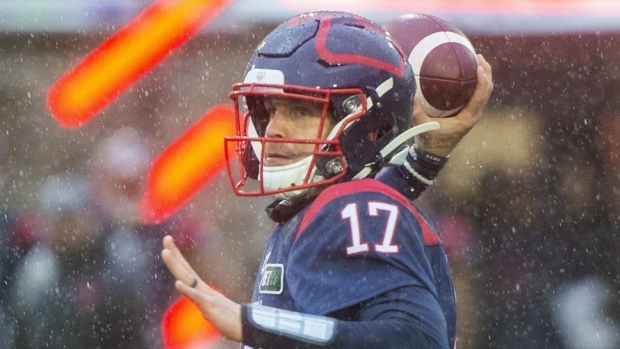 MONTREAL — The Montreal Alouettes have plenty of incentive to close out their regular season with a win over the Ottawa Redblacks on Friday.

The Alouettes (7-6) have clinched a playoff spot but still need outside help in order to play postseason football at Percival Molson Stadium. Montreal could host the Eastern Conference semifinal with a win and a Hamilton Tiger-Cats loss to the Saskatchewan Roughriders on Saturday.

Head coach Khari Jones has his eyes set on ending the season with a winning record and making things difficult for the Ticats. Jones has no intention to rest quarterback Trevor Harris and says he won’t hold anything back against Ottawa.

“I want to put pressure on the game after us to make sure that they have to take care of business and if they don’t then we play at home,” Jones said. “That’s very important and because of that I want to play [Harris] and make sure that things are running the right way.”

Harris also wants a win to keep Montreal’s momentum alive heading into the playoffs. The CFL veteran has two starts under his belt with the Alouettes.

“The more reps for me the better at this point,” Harris said. “That way I can get as close as I can to mastering this offense as we start this playoff run but (Friday’s) game is about winning this football game.”

Running back William Stanback added that the Als are still finding their groove late this season and that they shouldn’t be taken lightly heading into the playoffs.

“I feel like we haven’t really shown the league what we have over here,” said Stanback. “Right now, the stretch that we’re having going into the postseason, I believe that everyone is going to start to see what we really are about.”

Eliminated from playoff contention, the Redblacks (2-11) will give their last game of the season to quarterback Caleb Evans. In his rookie season, Evans threw for 1,106 yards and five touchdowns and was intercepted nine times in six games.

“It’s just a lot of football for those young guys so he’s performed well and we expect him to perform well (on Friday)."

The Als will look a little different on offence from last week’s 28-14 win over the Winnipeg Blue Bombers. Wide receiver Eugene Lewis is out with a hip injury and will be replaced with Dante Absher.

“Dante is a great wide receiver and I’ve liked Dante from afar for a long time,” Harris said. “I think he’s a tremendous route runner and having the ability to watch him do his thing, run his routes and be crisp as he is, I think he poses a lot of problems as well.

“There’s a reason Geno Lewis is Geno Lewis, make no mistake about it, but we’re excited about Dante as well.”

Harris will once again have a new centre to work with as Sean Jamieson returns to action following a knee injury.

“When Trevor got here I introduced myself and we talked. He’s obviously a veteran in the league, he’s been around and he knows the game,” Jamieson said. “I’m just looking forward to getting out there with him, I don’t think there’s going to be too many setbacks with him back there.”

Regardless of who will host the Eastern Conference semifinal, the Alouettes are focused on improving with Harris leading the offence. Jones is confident that the Ticats will be getting the best post-season football his squad can offer at either Percival Molson Stadium or Tim Hortons Field.

“That’s really what we’ve been striving for in the building towards something that we feel good about going into the playoffs and the last game really did feel good on all fronts,” Jones said. “We just want to do our part and do what we can, but after that it’s 0-0 and if we play home or away, I’ll feel good about our team.”

WEINEKE TD KING: With Eugene Lewis out on injury, Jake Wieneke could pass his teammate in the CFL touchdown race. Both receivers currently lead the league with nine touchdowns in the final week of the regular season.

WASHINGTON OUT: Alouettes offensive lineman Tony Washington is out with a calf injury. Rookie Nick Callender will replace him at left tackle. Landon Rice will move from right guard to right tackle.