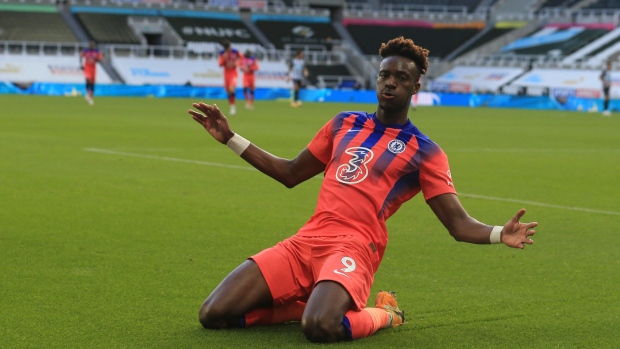 NEWCASTLE, England — Tammy Abraham scored in his third club game in a row as Chelsea beat Newcastle 2-0 on Saturday to stay among the English Premier League leaders.

Chelsea took the lead in the 10th minute when Federico Fernandez knocked the ball into his own net, and the goal was given despite Fernandez's protests that he had been pushed as Mason Mount's low cross came in.

Timo Werner had a fruitless day in front of goal, missing once after getting behind the defence and seeing another effort ruled out for offside. The German had more success as a provider, though, dribbling from his own half past two Newcastle defenders before setting up Abraham for a simple first-time finish for the second goal in the 65th. That won Werner praise from manager Frank Lampard.

“He had a couple of chances and some times it doesn’t go in for you, but I thought he was a real threat for us throughout," Lampard said.

“You need players of that quality (to win) ... and the pace he travels with the ball is something special. He was so unselfish and you rely on those players who are top class.”

Abraham also scored against Rennes and Sheffield United before the international break. He has four goals in 12 games this season and is combining well with Werner, who had been widely expected to compete against Abraham for a place in the lineup after joining Chelsea from Leipzig in the summer.

Even going a goal down initially did little to shake up Newcastle's defence-first approach, and the hosts didn't register a shot on target until the 82nd minute, when Edouard Mendy pushed away a deflected shot. Isaac Hayden earlier missed the Chelsea goal after a defensive mix-up, and a speculative long-range shot from Sean Longstaff bounced off the crossbar and out of play.

“I’m frustrated because we can’t get a result," Bruce said. "I make no excuses but we’ve played three of the top six in the last few weeks. It’s been difficult but there was a lot to like about that second-half performance.”