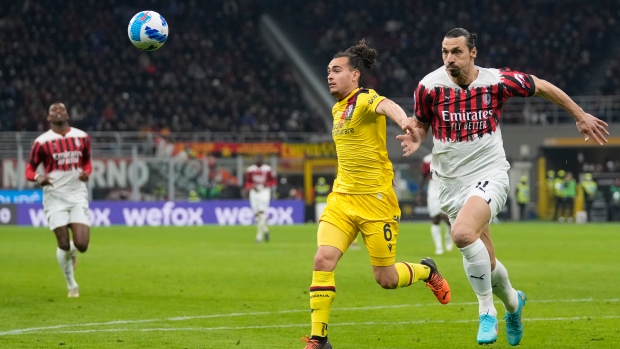 MILAN (AP) — AC Milan missed the chance to pull three points clear at the top of Serie A as it was held to a 0-0 draw by Bologna on Monday.

The result left Milan just one point ahead of second-place Napoli with seven matches remaining. Defending champion Inter Milan was four points behind its city rival but having played a match fewer.

Milan had 33 efforts on goal but couldn't break the deadlock. The Rossoneri have managed 69 attempts in its past three matches but only scored twice.

“It’s easy to analyze the match, we couldn’t manage to find the spark to get the ball into the net,” Milan coach Stefano Pioli said. “It wasn’t a mental block, or pressure … we were just lacking in the final 20 meters, unfortunately it’s a period where we are creating a lot but we’re not being clinical."

It was Bologna’s first match since coach Siniša Mihajlović returned to hospital for treatment for leukaemia. He beat the disease in 2019.

Mihajlović briefly coached Milan six years ago and there was message of support for him on the big screens before the match.

Bologna hasn’t scored a goal since February, the same round in which Milan last conceded a goal, but it was the visitors who had the better of the early chances with Rossoneri goalkeeper Mike Maignan forced into a number of saves including a fantastic one to fingertip a scorching shot from Musa Barrow over the bar.

Milan had chances of its own and Theo Hernández sent a powerful effort just past the right post in the 33rd minute.

It went even closer on the stroke of halftime with a towering header from Olivier Giroud, which was stopped by Bologna goalkeeper Łukasz Skorupski.

Milan should have broken the deadlock in the 61st but Davide Calabria’s shot was deflected just past the far post by a last-ditch sliding tackle from Bologna defender Gary Medel.

Zlatan Ibrahimović, who is returning from injury, was brought on with 20 minutes remaining but the veteran Milan forward was unable to change the result.

Ibrahimović was left bleeding and finished the match heavily bandaged after a clash of heads with Medel, who was unable to continue.

Relegation-threatened Genoa suffered its first defeat under coach Alexander Blessin as it lost 1-0 at Hellas Verona.

Genoa had drawn seven matches and won one since Blessin replaced Andriy Shevchenko in January.

Giovanni Simeone netted in the fifth minute as he just beat a defender to a through ball and poked it in at full stretch for his 16th league goal of the season.