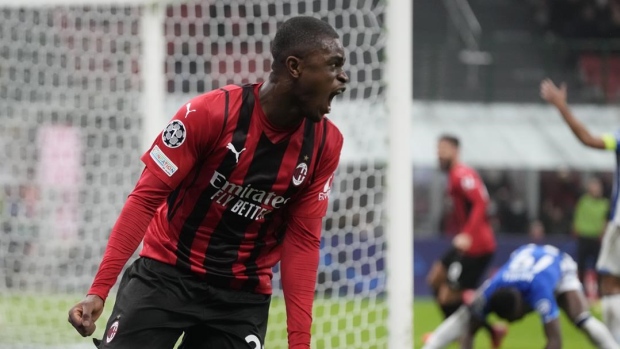 MILAN (AP) — AC Milan earned its first point of the Champions League campaign with a 1-1 draw at home against Porto on Wednesday, although the result leaves the Italian club with only a slim chance of progressing to the next round.

Luis Díaz netted an early opener for Porto and Milan goalkeeper Ciprian Tătărușanu kept his side in the match with a string of fine saves before an own-goal from visiting defender Chancel Mbemba salvaged a draw for the Rossoneri.

Milan remained bottom of Group B, 11 points below leader Liverpool after the Premier League side beat Atlético Madrid 2-0 to win the group with two matches to spare. Milan is only four points below second-place Porto and three below Atlético.

The Rossoneri play Atlético next in the competition before the final group game against Liverpool.

“In the second half we certainly played well, with intensity,” Milan coach Stefano Pioli said. “We struggled in the first half: we could have done better, you have to be in these matches for the whole 90 minutes.

“Not having won it complicates matters, we’ve still got two matches to play, of a really high level, against really great opponents. We will try, also because we want to win a first match in the Champions League.”

Milan is joint top of Serie A despite an injury crisis but it has been a different story on its return to the Champions League for the first time since the the 2013-14 season as the Rossoneri lost all three of their opening games.

Against Porto, Milan trailed after barely five minutes as Marko Grujić managed to wrestle the ball off of Ismaël Bennacer and drive into the area before rolling across for the unmarked Luis Díaz, who had plenty of time to take a touch and shoot past Tătăruşanu.

Grujić wasn’t even meant to be starting but was a late replacement for fellow midfielder Mateus Uribe, who had pulled up in the warmup.

He was a driving force up front and at the back for Porto and Tătăruşanu had to pull off four saves to deny him from doubling his side’s lead.

Milan almost scored an equalizer out of nowhere in the 33rd minute, with its first real chance, but Porto goalkeeper Diogo Costa did well to fingertip Olivier Giroud’s long-range effort away from goal.

Porto went even closer to doubling its lead 10 minutes into the second half but Evanilson’s header came off the bar.

Instead it was Milan which got the second of the match, against the run of play, in the 61st minute. Bennacer’s free kick hit the wall before rolling through for Giroud, who fired towards goal as he fell. Diogo Costa managed to parry but it came to Pierre Kalulu, whose desperate, angled attempt was turned into his own net by Mbemba.

Zlatan Ibrahimović, who had come on as a substitute, thought he had scored a late winner but it was ruled out for offside in the buildup.