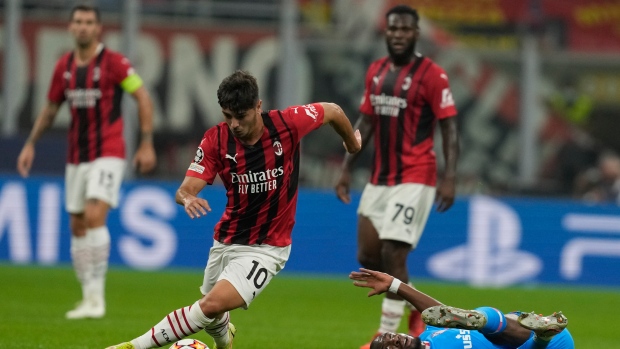 MILAN (AP) — AC Milan president Paolo Scaroni is confident the team’s new stadium will be ready in three years and that the club will be ready to break ground on the project by the end of next year.

The beginning of the end for Milan’s iconic San Siro stadium was announced in 2019 when the Rossoneri and Inter Milan unveiled the two shortlisted projects for their proposed new stadium.

The two rival clubs both play their home games at the Stadio Giuseppe Meazza — commonly referred to as San Siro.

Planning for the new stadium is expected to start in earnest after the municipal elections in Milan next month.

“It’s too early, however, to give a schedule for the works and for the end of the construction project.”

It has yet to be decided which one of the two shortlisted projects will be given the green light. And, more controversially, whether to demolish the Meazza — which was built in 1925 and is the largest stadium in Italy with a capacity of 80,000.

Only four teams in Serie A own their stadiums: Juventus, Atalanta, Sassuolo and Udinese. According to Italian media reports, a new stadium could earn the Milan clubs approximately 120 million euros ($140 million) annually.

“It’s fundamental both for Milan and for Inter,” Scaroni continued. “Without a new stadium it will be very difficult to be competitive in Europe.”

Scaroni talked to the AP ahead of the launch of “Restore the Music Milan” — a charitable initiative that aims to tackle educational poverty using music and sports.

Among others present at the event at a school in Milan were Italian musicians Saturnino and Rkomi, and Gordon Singer, who is a managing partner in Elliott Management — the U.S.-based hedge fund that owns Milan — and also one of the founding members of “Restore The Music UK.”

The event took place the day after Milan's first home Champions League match in more than seven years. That ended in a 2-1 loss to Atlético Madrid that left the Rossoneri fuming at refereeing decisions following the sending off of Milan midfielder Franck Kessié and then a stoppage-time penalty for Atlético.

“I invited the referee from last night’s match here but I don’t see him,” Singer quipped.