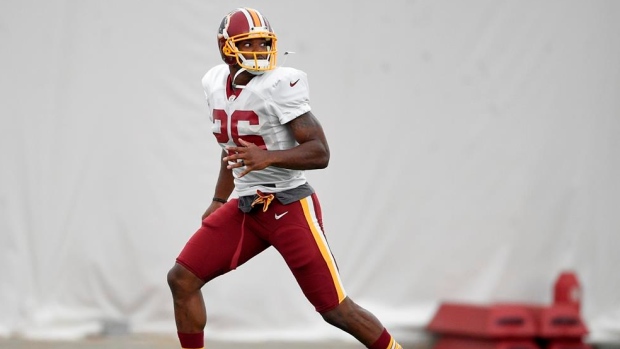 WASHINGTON — Adrian Peterson believes he still has something left.

The 33-year-old running back had his first practice with the Redskins on Tuesday, a day after signing a one-year deal with Washington.

"I can give a lot. I really believe that," Peterson said following his first practice. "I feel like the sky is the limit."

Injuries and opportunity limited Peterson to 13 games over the past two seasons. He averaged 3.4 yards per carry in 10 games last season with the Saints and Cardinals.

Peterson remained on the sideline throughout the off-season waiting for the next opportunity, a scenario he admitted was "rough."

His workouts continued. Peterson was in his native Oklahoma when his agent said the Redskins wanted a look. The three-time NFL rushing champion was ready.

"I know what I have left in the tank," Peterson said.

Despite his career achievements, Peterson didn't big-time the workout opportunity. He volunteered to join other free-agent options in various drills.

"He's actually a physical freak," Redskins coach Jay Gruden said. "Some of the backs we had in here were huffing and puffing, keeling over. He was standing straight up. He could have gone for another two hours."

The Redskins decided they couldn't go forward with their limited options at running back for the final two preseason games and possibly their Week 1 opener at Arizona on Sept. 9.

Washington, 28th in yards rushing last season, addressed the concern by selecting running back Derrius Guice in the second round of the draft. The LSU product's rookie year ended with a season-ending knee injury in the first preseason game against New England.

The Redskins lost Samaje Perine and Byron Marshall for an extended period of time as both suffered ankle injuries in Thursday's preseason win over the New York Jets.

After waiving undrafted free agent Martez Carter with an injury designation, the Redskins had only three healthy running backs available. One of them, Chris Thompson, has yet to play in the preseason following last season's broken fibula.

Robert Kelley, a 2016 undrafted free agent who emerged as Washington's No. 1 running back during his rookie year and started 2017 on top of the depth chart, remains in the starting mix. Kapri Bibbs offers some depth. Adding Peterson and De'Veon Smith provides more.

"We haven't really gotten into detail, but obviously they brought me in here for a reason. I'm just going to play my role, whatever it is," said Peterson, whose is three years removed from rushing for 1,485 yards with the Vikings. He finished with 529 yards last season.

"It shows me people don't really know about football," Peterson said of the naysayers. "When people say, (3.4) yards per carry, there's a lot that contributes to that as well. I just brush it off and continue to work."

That work began Tuesday with the Redskins.

"It's his first practice. He did a great job today," said Gruden, who stated he hoped to get Peterson some work in Friday's preseason game against Denver.

"You've got a Redskins jersey on. You're here to compete and make the squad. It's no different with (Adrian). We'll just see how he does day after day."