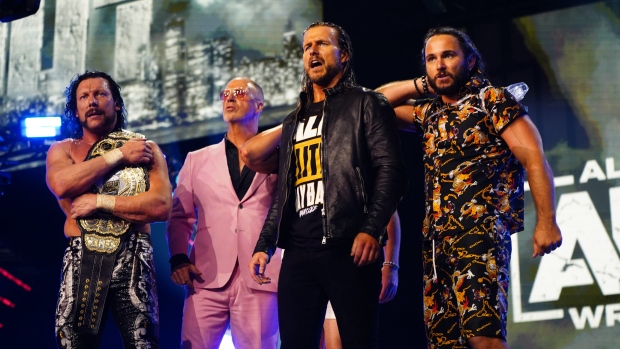 AEW Dynamite celebrates its second anniversary live from Philadelphia with a show headlined by an eight-man tag team match as The Elite (Kenny Omega, Adam Cole, Nick Jackson and Matt Jackson) take on the team of Bryan Danielson, Christian Cage and Jurassic Express (Jungle Boy and Luchasaurus), plus a Casino Ladder Match for an AEW World Championship match and Sammy Guevara makes his first TNT Championship defence.  You can catch AEW Dynamite LIVE at 8pm et/5pm pt on TSN5, streaming on TSN Direct and on TSN.ca.

Eight-man tag team match: The Elite (AEW World Champion "The Cleaner" Kenny Omega, Adam Cole, Nick Jackson and Matt Jackson) (w/ Don Callis and Brandon Cutler) vs. "The American Dragon" Bryan Danielson, Christian Cage and Jurassic Express (Jungle Boy and Luchasaurus) (w/ Marko Stunt) - We've seen these eight men meet in various combinations of singles, tag and trios matches over the course of the past several weeks, but Wednesday night will be the largest coming together yet of these two warring sides. The match will mark the first time that Omega and Cole have teamed up in seven years and it's only the second ever time that Cole and Danielson have shared a ring. The history among these eight men is well known with Cage being one of only three men to have ever pinned Omega in an AEW ring and Danielson still looking for another one-on-one shot against the AEW World Champion after their first encounter at Grand Slam two weeks ago ended in a time-limit draw. Will The Elite stand tall or will the team of Danielson, Cage and Jurassic Express get one over on their rivals?

Casino Ladder Match for an AEW World Championship match: Jon Moxley vs. "The Bastard" PAC vs. Andrade El Idolo vs. "The Murderhawk Monster" Lance Archer (w/ Jake "The Snake" Roberts) vs. Matt Hardy vs. "Freshly Squeezed" Orange Cassidy vs. ??? - For only the second time in company history, a challenger for the AEW World Championship currently held by Kenny Omega will be determined by a Casino Ladder Match. At Double or Nothing 2020, "The Machine" Brian Cage defeated eight other men to win the inaugural Casino Battle Royale. Wednesday night's match features a former AEW World Champion in Jon Moxley, as well as one of the competitors from the first Casino Battle Royale in Orange Cassidy. There will also be no love lost among many of these six men. Archer was the man who defeated Moxley for his IWGP United States Championship, Cassidy and Matt Hardy have been engaged in a bitter feud for weeks and PAC and Andrade have been at each other's throats for some time. The great deal of mutual distrust on display in this match will certainly play a big role, but there is also "The Joker" for these men to worry about. The match will feature a seventh surprise competitor whose identity will not be revealed until he's introduced for that match. How will this mystery man's presence alter the equation? Which of these seven men will climb the ladder to earn a shot at Omega's title?

TNT Championship match: "The Spanish God" Sammy Guevara (c) vs. Bobby Fish - A week after defeating the previously undefeated Miro for the TNT title in an emotional main event, Sammy Guevara makes his first defence against a cagey veteran in Bobby Fish, who makes his AEW debut. A veteran of two decades in the sport, Fish has been a tag-team specialist in recent years, holding both the IWGP Junior Heavyweight Tag Team Championship and ROH World Tag Team Championships with Kyle O'Reilly as reDRagon and the NXT Tag Team Championship alongside O'Reilly, Adam Cole and Roderick Strong as Undisputed Era. But Fish does have his bona fides as a singles competitor. In 2016, Fish defeated Tomohiro Ishii for the ROH TV Title in one of the biggest singles victories of his career. He'll be looking to make the same kind of statement on Wednesday night against Guevara. Can Guevara get his reign started in style with a win over Fish or will the debutant end Guevara's time as TNT Champion before it really even begins?

Hikaru Shida vs. Serena Deeb - On a night where AEW is celebrating the second anniversary of Dynamite, Hikaru Shida is looking for a milestone of her own. The former AEW Women's World Champion is seeking to become the first woman in the company to 50 wins. To reach that feat, she will have to dispatch of stiff competition in the form of former NWA Women's World Champion Serena Deeb. While Shida has taken on almost every woman on the AEW roster, this will be a first-time encounter against Deeb. Widely considered one of the best technical wrestlers on the roster, Deeb presents a challenge unlike any other faced by Shida in her time with AEW. Will Shida reach the half-century mark or will Deeb send a message to the rest of the AEW women's roster?