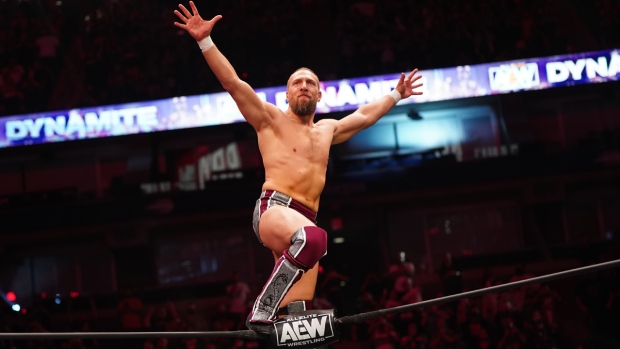 Ahead of his World Title Eliminator tournament final match up against Miro at Full Gear, "The American Dragon" Bryan Danielson is in action against Rocky Romero on AEW Dynamite. Plus, PAC takes on FTR's Dax Harwood and Matt Sydal and Lee Moriarty team up to face Dante Martin and Lio Rush. You can catch AEW Dynamite LIVE at 8pm et/5pm pt on TSN2, streaming on TSN Direct and on TSN.ca.

"The American Dragon" Bryan Danielson vs. Rocky Romero (w/ Orange Cassidy) - Bryan Danielson can earn a shot at the AEW World Championship on Saturday night should be beat Miro at the Full Gear pay-per-view, but before he can do that, he must deal with the challenge of a man he knows very well in Rocky Romero. Danielson and Romero have teamed together and faced each other on numerous occasions in the early stages of their careers in both the United States and Japan. Wednesday night's match up comes nearly 20 years after the two first shared a ring. At New Japan Pro-Wrestling's Spiral pay-per-view at the Tokyo Dome in Oct. 2002, Danielson teamed up with Romero and his longtime tag partner Ricky Reyes in a trios loss to Jushin "Thunder" Liger, Tiger Mask and Masahito Kakihara. The most high-profile match between the pair came at Ring of Honor's Steel Cage Warfare in New York City in 2005 when Danielson successfully defended his ROH World Championship against Romero. The Dynamite match will mark the first time the two have met since 2008. Much has changed since then with both men winning numerous titles and accolades over the years and having honed their considerable skill. Will Danielson head into the PPV on a winning note or will Romero prove his mettle against one of the world's very best wrestlers?

AAA World Tag Team Champion Dax Harwood (w/ Cash Wheeler and Tully Blanchard) vs. "The Bastard" PAC - Dax Harwood and PAC meet at a time when the pair is embroiled in feuds with other people in his opponent's orbit. One half of FTR, Harwood and Cash Wheeler will meet PAC's Death Triangle stablemates, the Lucha Bros. (Rey Fenix and Penta El Zero Miedo) for the AEW World Tag Team Championships at Full Gear, while PAC's been consumed by a rivalry with Andrade El Idolo, a man who has a business arrangement with FTR. For Harwood, PAC represents an opponent much like Fenix and Penta - a high-flyer whose aerial arsenal will need to be neutralized in order to win, making Wednesday night's match a perfect tune-up for the PPV. Can PAC get the better of Harwood or will Harwood use Wednesday night's match to send a message to the Lucha Bros.?

Trios match: Thunder Rosa, Tay Conti and Anna Jay vs. AEW Women's World Champion Dr. Britt Baker, DMD, Jamie Hayter and Rebel - Before Britt Baker defends her AEW Women's World Championship against Tay Conti at Full Gear, the two women will do battle in trios action on Wednesday night. The match also features another meeting of future opponents in Jamie Hayter and Thunder Rosa who are set to meet in the semi-finals of the TBS Women's Championship Tournament. Hayter advanced to the semis with a victory over Anna Jay last week and after the match, hostilities boiled over with all six of these women getting involved. This Dynamite match will be the perfect opportunity for each side to set the tone going forward. Which trio of women will come out on top?

Matt Sydal and Lee Moriarty vs. Dante Martin and "The Man of the Hour" Lio Rush - Did Dante Martin make the right call? Wednesday night's encounter might start to answer that question. With brother Darius still sidelined with injury, Martin had formed a team with Matt Sydal, but in recent weeks, Lio Rush got into Martin's ear and convinced him that Sydal was holding him back and teaming with him would be the better career move. Sydal took the change in stride and took AEW newcomer Lee Moriarty under his wing. One of the hottest names on the indies, Moriarty has taken on the likes of Danhausen, Trey Miguel and Calvin Tankman in recent months. Teaming with a savvy veteran like Sydal might be the fastest way to make a splash in AEW and Moriarty will get that chance on Wednesday night. Will Martin and Rush come out with a victory or will Sydal and Moriarty show Martin what he's missing?