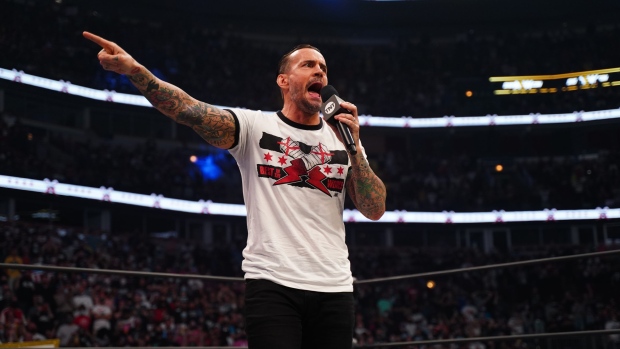 CM Punk steps into the ring on Dynamite for the first time on Wednesday night when he takes on Bobby Fish. Plus Sammy Guevara puts his TNT Championship on the line against Ethan Page and in eight-man tag-team action The Elite meet the Dark Order. You can catch AEW Dynamite LIVE at 8pm et/5pm pt on TSN5, streaming on TSN Direct and on TSN.ca.

CM Punk vs. "The Infamous" Bobby Fish - CM Punk makes his Dynamite in-ring debut on Wednesday night in a match that came out of the aftermath of a bout on last Saturday night's edition of the show. After quickly dispatching Anthony Greene with a high kick, Bobby Fish wasn't done with him even after pinning him. Fish began to lay in a vicious ground-and-pound on the fallen Greene leading to Punk running in to make the save. While both have worked in the same promotions over the years, Wednesday night's match will mark the first ever meeting between the two veterans. Punk heads into the match with a perfect 4-0 mark in AEW, while Fish has won two of his last three matches with the sole blemish coming in a loss to Bryan Danielson. Will Fish be the first to pick up a victory over Punk or will Punk remain undefeated in AEW?

Eight-man tag-team match: The Elite (AEW  World Champion "The Cleaner" Kenny Omega, Adam Cole, Matt Jackson and Nick Jackson) (w/ Don Callis and Brandon Cutler) vs. Dark Order (Colt Cabana, Evil Uno, Stu Grayson and John Silver) - Ahead of Kenny Omega's AEW World Championship title defence against "Hangman" Adam Page at Full Gear, The Elite and Dark Order will once again renew hostilities on Dynamite. It marks the first meeting between the two factions since the 10-man elimination tag match on the July 28 Dynamite in which The Elite came out victorious and, at the time, ensured that the Hangman wouldn't get a shot at the world title. But since then things have changed and Page earned his shot at Omega through winning the Casino Ladder Match earlier this month. The Elite will likely use this match to send a message to Page through doling out a beating to his friends, but this Dark Order team is no stranger to The Elite with the rivalry between the Young Bucks and Stu Grayson and Evil Uno spanning several years and several promotions. Which side will pick up an important victory heading into the pay-per-view?

TNT Championship match: "The Spanish God" Sammy Guevara (c) vs. "All Ego" Ethan Page (w/ Dan Lambert and Scorpio Sky) - The stakes in Wednesday night's match between Sammy Guevara and Ethan Page couldn't get any higher for both men. This is not simply a title match. There is a lot more on the line here. Should Page win, he will obviously become the new TNT Champion, but a Page win also mean that Guevara will have to leave the Inner Circle forever. But should Guevara retain his title, there's something more in it for him, as well. A Guevara victory means that he gets to select the five men who will represent American Top Team at Full Gear in a 10-man tag against the Inner Circle. Page will head into the match feeling confident. The only blemish in singles action for Page in his AEW career came in a coffin match against Darby Allin, meaning that he has yet to be pinned or submitted in an AEW ring. Can Page claim the TNT title or will it be another successful defence for Guevara?

TBS Championship Tournament match: Hikaru Shida vs. Serena Deeb - Wednesday night's contest is a tournament match and a grudge match rolled into one. On the Oct. 6 edition of Dynamite, Hikaru Shida met Serena Deeb looking to make history. A win would have given Shida her 50th victory in AEW, making her the first women's competitor to do so. But Deeb had other ideas. Not only did she defeat Shida to prevent her from reaching that milestone, but she also took the plaque that was set to be given to Shida for winning her 50th match and destroyed it over her head. Shida is now looking for revenge and to use Deeb as a stepping stone to move on in the tournament to crown the inaugural TBS Champion. The winner of Wednesday's match will face off with former AEW Women's World Champion, "The Native Beast" Nyla Rose in the second round. Rose was one of four women who received a first-round bye by virtue of her standing in the AEW Rankings. Will Shida avenge her loss and get that 50th victory or will Deeb use her newfound mean steak to advance?

World Title Eliminator match: Preston "10" Vance vs. Jon Moxley - In order for Dark Order's Preston Vance to earn a shot at the AEW World Championship, he's going to have to go through a former champion to do so in Jon Moxley and that might be easier said that done. A new father running on minimal sleep, Moxley has been ornery lately, even more so than he usually is and might decide to use Wednesday's match as a way to take out his frustrations. This won't be the first ever meeting between the two men. Vance and Moxley faced off in the spring of 2020 in a match on Dynamite with Moxley, then the AEW World Champion, putting Vance away with a Gotch-style piledriver followed by the Paradigm Shift. The winner of Wednesday night's match will face off with Orange Cassidy in the second round. Will Vance be able to learn from his previous mistakes or will Mox take the next step in getting back his AEW Championship?

- A week after leaving "The Icon" Sting lying, Maxwell Jacob Friedman is in singles action.