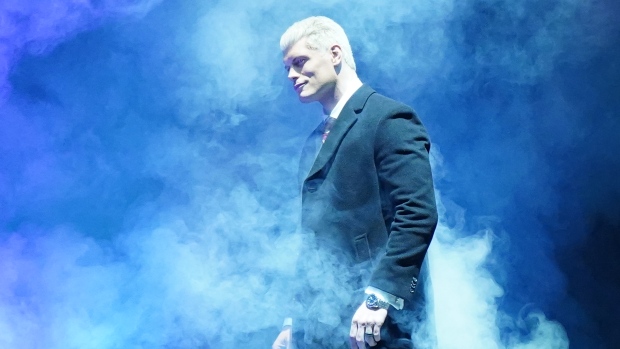 Cody Rhodes and Andrade El Idolo continue their bitter rivalry in an Atlanta Street Fight, plus both CM Punk and Bryan Danielson are in action from Duluth, GA's Gas South Arena. You can catch AEW Dynamite LIVE at 8pm et/5pm pt on TSN2, streaming on TSN Direct and on TSN.ca.

Atlanta Street Fight: "The American Nightmare" Cody Rhodes (w/ Arn Anderson) vs. Andrade El Idolo (w/ Jose the Assistant) - The feud between Cody Rhodes and Andrade El Idolo continues on Dynamite and it's set to get violent. An Atlanta Street Fight means no disqualifications and anything goes, with which neither man will take any umbrage. This will be the pair's second singles match. On the Nov. 3 edition of Dynamite, Andrade defeated Rhodes thanks to outside interference from FTR (Dax Harwood and Cash Wheeler) and there's no guarantee that they - or Andrade's other associate, Malakai Black - won't make another appearance on Wednesday night. Last Wednesday night's show saw the team of Andrade, FTR and Black defeat Rhodes and Death Triangle (PAC, Rey Fenix and Penta El Zero Miedo) in eight-man action. While Cody and his teammates weren't always on the same page last week and there was clear miscommunication between him and PAC, might Rhodes once again need their assistance on Wednesday night?

"The American Dragon" Bryan Danielson vs. Alan "5" Angels - Bryan Danielson's run through the Dark Order as he prepares to take on AEW World Champion "Hangman" Adam Page continues and for a second straight week, he meets a Dark Order member in their hometown. On last Wednesday's Dynamite, Danielson pounded Colt Cabana into submission in Chicago (and took out one of his teeth in the process) and will now meet Alan Angels in the Atlanta area. Danielson isn't in for a walk in the park. Angels is no stranger to holding his own against the very best wrestlers AEW has to offer. He has famously taken former AEW World Champion Kenny Omega to his very limit on two occasions. But Danielson is out to prove a point. His whole mission is to take out Page's friends before he meets the Hangman himself and do so in the most brutal fashion possible. He's already done so with Cabana and Evil Uno and will look to make Angels his latest example. Can Angels prove his mettle or will the American Dragon collect another Dark Order victim?

TBS Championship Tournament quarterfinal match: Ruby Soho vs. Kris Statlander (w/ Best Friends) - Two women who were unsuccessful in their recent attempts to pry the AEW Women's World Championship away from Dr. Britt Baker, DMD will meet on Wednesday night for a spot in the semi-finals of the TBS Championship Tournament when Ruby Soho faces off with Kris Statlander. This will mark the first ever meeting between the two women as opponents. They previous shared the ring on the same side in a six-woman tag-team match in September when they teamed with Riho to defeat the trio of Baker, Jamie Hayter and Rebel. Soho heads into the match at 6-0 since her loss to Baker at Grand Slam in September and is looking for the opportunity to once again challenge for gold, but Statlander stands in her way. The winner of this match will meet "The Native Beast" Nyla Rose in the semi-finals.

CM Punk vs. Lee Moriarty - Since arriving in AEW, CM Punk has let it be known that he wants to compete against the best young talent the company has to offer and he will get the opportunity to do that again on Wednesday night when he answers the challenge of Lee Moriarty. But Punk will likely have more than just Moriarty on his mind. On last week's Dynamite, Punk had an epic duel on the mic with Maxwell Jacob Friedman with both men nailing the other with heavy verbal blows. One of MJF's biggest sources of contention with Punk is that he's grown soft. His fire is gone, MJF says. Could Friedman have a point? While he remains undefeated in AEW, Punk struggled to put QT Marshall away last week. Not one of Punk's victories in AEW hasn't been earned. Getting past Moriarty will not be easy, either, in what is undoubtedly the biggest match of Moriarty's young career. Though Moriarty has taken on the likes of Jonathan Gresham, Trey Miguel and Rich Swann in the past, none of his opponents has had the profile of a CM Punk and what better way to announce your arrival in AEW than handing the former seven-time world champion his first defeat in AEW?

Gunn Club (Billy Gunn and Colten Gunn) (w/ Austin Gunn) vs. Darby Allin and Sting - Two savvy veterans will team up with their respective proteges as tag-team legend Billy Gunn joins his son, Colten Gunn, to take on the team of Sting and Darby Allin. Neither of these two teams has tasted defeat in AEW with the Gunns holding a 9-0 mark and Allin and Sting winning all four of their tag-team contests. The source of enmity among the four men was the Nov. 17 edition of Dynamite when the Gunn Club mocked Allin for his loss to MJF at Full Gear. On Rampage two days later, Allin defeated Billy Gunn, but he and Sting were then subjected to a brutal beating by Colten and Austin Gunn. The feud boiled over on Dynamite again last week when Allin and Sting attacked Gunn Club after their victory over Bear Country. With the bad blood running deep between these two teams, Wednesday night's encounter should be anything but pretty.