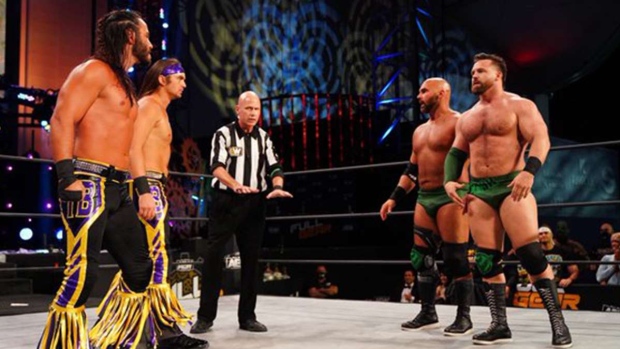 FTR puts their ROH and AAA World Tag Team Championships on the line against archrivals, the Young Bucks. Plus, Samoa Joe makes his AEW debut against Max Caster in an Owen Hart Foundation Cup qualifier and Adam Cole takes on Christian Cage. You can catch AEW Dynamite LIVE at 8pm et/5pm pt on TSN2, streaming on TSN Direct and on TSN.ca.

ROH and AAA World Tag Team Championships match: FTR (Dax Harwood and Cash Wheeler) (c) vs. The Young Bucks (Matt Jackson and Nick Jackson) (w/ Brandon Cutler) - Already the AAA World Tag Team Champions, Dax Harwood and Cash Wheeler added to their already considerable legacy on Friday night when they defeated the Briscoes (Mark Briscoe and Jay Briscoe) for the ROH World Tag Team Championships at Supercard of Honor in an instant classic match that will undoubtedly feature high on the list of best matches of 2022 at the end of the year. After the match, FTR paid their respects to the ROH icons and left them in the ring to soak up the adulation from the crowd. But as the Briscoes played to the crowd, Matt Jackson and Nick Jackson jumped the guardrail and beat down the duo. FTR came back out to make the save and immediately challenged the Bucks to a match, but they deferred until Wednesday night. So on Dynamite, we get only the second ever meeting between the two teams. At Full Gear 2020, FTR seemed to have the Jacksons beat, but instead of going for a pin, they decided to make a point. Trying to take a page out of the Bucks' book, Wheeler attempted a flip and paid for it. The Bucks made their comeback and claimed the victory to win the AEW World Tag Team Championships in what was an epic encounter. On Wednesday night, will the Jacksons make it two straight over FTR or will the "Top Guys" even up their rivalry?

Owen Hart Foundation Cup qualifying match: Samoa Joe vs. "Platinum" Max Caster (w/ Anthony Bowens) - After months out of the spotlight, Samoa Joe made his return to wrestling on Friday night at Supercard of Honor, coming to the aid of ROH World Champion Jonathan Gresham as he was attacked by Jay Lethal and Sonjay Dutt. Now in AEW, the ROH legend has his sights set on the Owen Hart Foundation Cup, but standing in his way is Max Caster, who faces off with an ROH icon for the second straight Wednesday night, having lost to CM Punk last week. Joe needs no introduction. An ROH Hall of Famer, Joe has held both the ROH World and Pure Championships, the TNA World Heavyweight Championship and X-Division title, the NXT Championship and the WWE United States Championship. One of the greatest wrestlers of his generation, Joe presents a problem for Caster unlike any he's faced before in AEW. Even with Anthony Bowens at ringside, Caster will need the match of his life to get past Joe. Can Bowens pull off the massive upset or will Joe start his AEW career with a victory?

Christian Cage (w/ Jungle Boy and Luchasaurus) vs. Adam Cole (w/ Bobby Fish and Kyle O'Reilly) - Adam Cole still has Adam Page and his AEW World Championship still on his mind, but before he can get another shot at the Hangman, he goes one-on-one with Christian Cage for the first time. As Cole noted on Twitter earlier in the week, Wednesday marks Cole's 14-year anniversary in pro wrestling and a win over a multiple-time world champion would be a helluva way to celebrate, but that might be easier said than done. Cage has not lost a singles match in AEW since he fell to Kenny Omega in an AEW World Championship match at All Out 2021 last September. While this will be a first-time singles match between the two men, it's not the first time they've faced off in AEW. Cole holds a 2-1 edge over Cage in matches, all of which were multi-man encounters. But Cage won the last one. At Full Gear last November, the team of Cage, Jungle Boy and Luchasaurus were victorious over the Superkliq (Cole, Matt Jackson and Nick Jackson). Can Cage rain on Cole's anniversary or will Cole build some momentum ahead of a potential rematch with the Hangman?

Tables match: The Hardys (Matt Hardy and Jeff Hardy) vs. The Butcher and the Blade (w/ The Bunny and Jose the Assistant) - During last week's tornado tag match on Dynamite, we saw Jeff Hardy doing Jeff Hardy things, delivering a massive Swanton off of a recess in a wall and putting The Blade through a table. The enmity between the Hardys and the Andrade Family Office continues on Wednesday night in a tables match. The rules of a tables match are very simple. To win the bout, you must put one of your opponents through a table. While there are few teams in AEW capable of the brutality of The Butcher and The Blade, the experience edge in tables matches is decidedly on the Hardys' side, having endured ferocious encounters with the likes of the Dudley Boyz and Edge and Christian over the years. That being said, it would be foolish for the Hardys to discount their opponents on Wednesday night. Which of the two teams has a back full of splinters in their future?

Owen Hart Foundation Cup qualifying match: Hikaru Shida vs. Julia Hart - Toni Storm was the first woman to punch her ticket to the Owen Hart Foundation Cup on last Wednesday night's Dynamite with her defeat of The Bunny. She'll be joined by another competitor on Dynamite when former AEW Women's World Champion Hikaru Shida faces off against Julia Hart. Shida makes her return to Dynamite after a three-month absence. The last time we saw her in January, her knee injury was exploited and exacerbated in a loss to Serena Deeb. Now healthy again, Shida meets Hart for a second time, after having defeated her in a match on Dark: Elevation last summer. While there are questions about Shida's physical health, there are concerns about where Hart's head is at of late. Still wearing a eyepatch after getting misted by Malakai Black months ago, Hart last appeared on Dynamite last month when she accompanied the Varsity Blonds (Brian Pillman Jr. and Griff Garrison) to the ring for their match against the Blackpool Combat Club (Jon Moxley and Bryan Danielson). Though Hart was physically at ring side, mentally she was elsewhere, looking completely disinterested and with her back to the ring. If she brings that mindset to her match on Wednesday night, Shida will make short work of her. Who will join Toni Storm in the Owen Hart Foundation Cup?

"The Chairman" Shawn Spears (w/ MJF) vs. Capt. Shawn Dean - It hasn't been smooth sailing for The Pinnacle in recent weeks. Sick of the constant abuse, Wardlow turned on Maxwell Jacob Friedman and left the group. FTR has made it clear that they're not cool with what MJF is doing to Wardlow and their membership in the faction seems tenuous at best. The only member of the group still completely on board with MJF is Shawn Spears and he's in action on Wednesday night against Capt. Shawn Dean. Spears heads into the match on a three-match winning streak and has defeated Dean in their previous two meetings. The Pinnacle could sorely use a victory on Wednesday night and will be counting on Spears to get the job done. Who will emerge victorious in the battle of the Shawns?