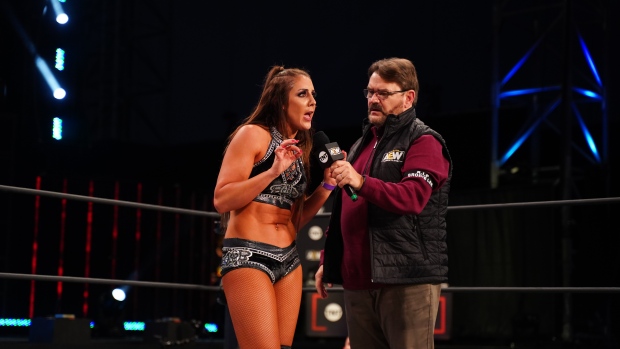 It's Night 2 of Fyter Fest on Dynamite with a card headlined by Dr. Britt Baker, DMD defending her AEW Women's World Championship against former champion Nyla Rose. Plus, Jon Moxley defends his IWGP United States Championship against Lance Archer in a Texas Death Match and Chris Jericho takes on Shawn Spears. You can catch Fyter Fest Night 2 LIVE at 8pm et/5pm pt on TSN2, the TSN app, streaming on TSN Direct and on TSN.ca.

AEW Women's World Championship match: Dr. Britt Baker, DMD (c) vs. "The Native Beast" Nyla Rose (w/ Vickie Guerrero) - Nyla Rose can become the first two-time women's champion in AEW history on Wednesday night when she takes on the woman she's been terrorizing for weeks in Britt Baker. After first running afoul of the good doctor during Baker's championship celebration following her win over Hikaru Shida at Double or Nothing, the enmity has intensified in the weeks leading up to Wednesday night's match. Two weeks ago on Dynamite, Rose emphatically asserted her dominance over Baker by power bombing her through a table. History is also not on Baker's side with Rose emerging victorious in their previous two singles matches over the years. Can Baker successfully defend her title for the first time or will the AEW Women's World Championship be going back around Rose's waist?

IWGP United States Championship Texas Death Match: Jon Moxley (c) vs. "The Murderhawk Monster" Lance Archer (w/ Jake "The Snake" Roberts) - Fresh off of a successful title defence last week against Karl Anderson, Jon Moxley once again puts up his US title on Wednesday night, but this won't be an ordinary match against an ordinary opponent. At Wrestle Kingdom 14 in the Tokyo Dome in January 2020, Moxley defeated Lance Archer in a Texas Death Match for the vacant US title and at Fyter Fest Night 2 in Archer's home state of Texas, they're running it back. Moxley has held onto the title since winning it that night, having successfully defended it on five occasions against the likes of Minoru Suzuki, KENTA and Juice Robinson. This will be Archer's first shot at the title since his defeat by Moxley over 18 months ago. The pair have met once previously in AEW when Moxley successfully defended the AEW World Championship against Archer on Dynamite's anniversary show last fall. But this will be a whole different kettle of fish in a match where anything goes. Will Mox make it through another challenger to his title or will Archer be keeping it in Texas?

The Five Labours of Jericho Match #1: "Le Champion" Chris Jericho vs. Shawn Spears - MJF made it clear to Chris Jericho that the only way he will agree to a match against Jericho is if he first completes the Five Labours put in front of him. On Wednesday night, he must undertake the first - a one-on-one encounter with MJF's Pinnacle stablemate Shawn Spears - but there's a catch: Spears, the so-called "Chairman of AEW," is free to use a chair in the match, but Jericho is not. Spears gave Jericho a preview of what he has in store for the former AEW World Champion when he surprised him with a chair shot to the throat last Wednesday. While the odds are seemingly stacked against Jericho, don't underestimate the power of revenge as a motivational tool. Will Spears and his chair prove to be too much or will Jericho get one step closer to getting his hands on Maxwell Jacob Friedman?

Frankie Kazarian vs. Doc Gallows (w/ "Machine Gun" Karl Anderson) - Frankie Kazarian has made it his mission to rid AEW of The Elite and he gets his first shot at a member of the stable in a one-on-one match on Wednesday night when he takes on one half of the Impact Wrestling World Tag Team Champions, Doc Gallows of the Good Brothers. Since the dissolution of SCU thanks to the Young Bucks' underhandedness, Kaz has been on a role in singles action. He heads into the match against Gallows riding a four-match winning streak. But when one member of The Elite is around, more will be close by, so Kazarian will have to keep his head on a swivel to make sure he's ready for interference from the likes of Karl Anderson, Don Callis or one of the Jacksons. Will "The Elite Hunter" claim his first victim or will Gallows compound Kazarian's misery when it comes to running into his crew?

"Freshly Squeezed" Orange Cassidy (w/ Chuck Taylor, Wheeler YUTA and Kris Statlander) vs. The Blade (w/ Hardy Family Office) - The feud that has been simmering for the past several weeks comes to a head on Wednesday night when Orange Cassidy finally gets his hands on The Blade. The two met on opposite sides of a mixed tag-team match two weeks ago when Cassidy and Statlander got the better of The Blade and his wife, The Bunny. But The Blade got the last laugh, laying out Cassidy with his trusty brass knuckles. Now the two will have the chance to settle matters one-on-one, but the problem with the Hardy Family Office is that nothing is truly one-on-one. Luckily for Cassidy, he will have his crew to back him up, as well. Can Cassidy enact his revenge or will The Blade once again get the upper hand?

Darby Allin (w/ Sting) vs. Wheeler YUTA (w/ Orange Cassidy, Chuck Taylor and Kris Statlander) - Fresh off his brutal victory over Ethan Page in a coffin match, Darby Allin jumps right back into action against one of AEW's top prospects in Wheeler YUTA. YUTA made his Dynamite debut last Wednesday and, while he didn't beat Sammy Guevara, he earned his respect in a helluva'n effort. Allin and YUTA have worked in many of the same promotions over the years, but the two have never crossed paths before and Wednesday night's match will be a first-time ever encounter. Will Allin stay hot and continue his run back into title contention or will YUTA pick up the biggest win of his young AEW career?

- After seemingly laying out a challenge to the three members of Death Triangle last week, we will hear what's on the mind of Andrade El Idolo.