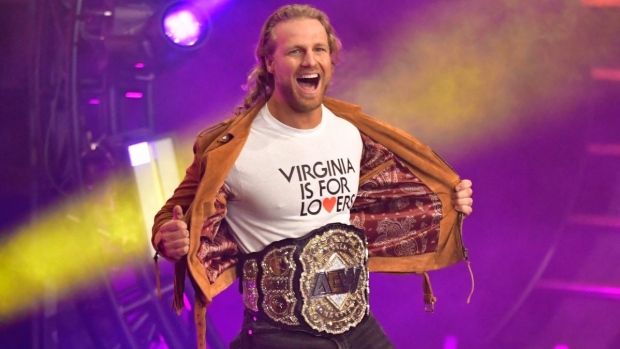 After their thrilling 60-minute draw solved nothing, "Hangman" Adam Page once again puts his AEW World Championship on the line against the undefeated Bryan Danielson. Plus, the Lucha Bros. defend the AEW World Tag Team Championship against the Jurassic Express and Ruby Soho and Jade Cargill meet to crown the inaugural TBS Champion. You can catch AEW Dynamite LIVE at 8pm et/5pm pt on TSN2, streaming on TSN Direct and on TSN.ca.

AEW World Championship match: "Hangman" Adam Page (c) vs. "The American Dragon" Bryan Danielson - At Winter Is Coming on the Dec. 15 edition of Dynamite, Adam Page and Bryan Danielson had one of the greatest matches in AEW history, but it solved nothing. Their 60-minute instant classic in which the two men brutally beat one another went to a time-limit draw. While that meant that Page held on to his AEW World Championship, it also meant that Danielson remained the No. 1 contender to the title. This time, though, we will have a winner. Should the duo go to a time-limit draw on Wednesday, the result will be determined by a panel of three judges. While all three judges have yet to be named, we do know that one of them will be "Platinum" Max Caster. This will only be Page's second defence of his title. Considering all he went through to win the belt, it would be a crushing disappointment for the Hangman to lose it without a single successful defence. But with the form that Danielson has been in since arriving in AEW, it's a very distinct possibility. Will former multi-time world champion Danielson add another honour to his collection or will Page keep his title and hand Danielson his first loss in AEW?

AEW World Tag Team Championship match: Lucha Bros. (Penta El Zero Miedo and Rey Fenix) (w/ Alex Abrahantes) (c) vs. Jurassic Express (Jungle Boy and Luchasaurus) (w/ Christian Cage) - For the past few weeks, the Lucha Bros. and Jurassic Express have found themselves on the same side during multi-man tag-team matches, but they haven't exactly seen eye-to-eye. On last week's Dynamite, miscommunication led to a breakdown that allowed FTR (Dax Harwood and Cash Wheeler) to hit the Big Rig on Christian Cage for a victory over the team of Penta, Fenix, Cage, Jungle Boy and Luchasaurus in a 10-man tag. After the match, an irate Cage challenged the Lucha Bros. on behalf of his team and the match was made. The match will mark the fourth meeting between the two teams in tag-team action. The Lucha Bros. currently hold a 2-1 edge with the most recent match coming in August when Penta and Fenix were victorious in the AEW World Tag Team Title Eliminator Tournament Final. Since defeating the Young Bucks for the titles at All Out, the Lucha Bros. have defended them successfully four times. Can they make it five straight on Wednesday night?

TBS Championship Tournament final: Ruby Soho vs. Jade Cargill (w/ "Smart" Mark Sterling) - It's all come down to this. Ruby Soho and Jade Cargill outlasted 10 other women to remain standing at the end as AEW crowns its inaugural TBS Champion on Wednesday night. Soho reached the final by going through Penelope Ford, Kris Statlander and former AEW Women's World Champion "The Native Beast" Nyla Rose. After a first-round bye, Cargill got past Red Velvet and Thunder Rosa (thanks to an assist from Mercedes Martinez) to book her spot in the final. While Cargill is still undefeated in AEW, this match is her biggest test yet and first opportunity to claim gold in the promotion. Soho couldn't defeat AEW Women's World Champion Dr. Britt Baker, DMD, when she challenged her in September, so she's relishing this second chance for a championship. Will Cargill stay undefeated and get some gold around her waist or will Ruby Soho become the first ever TBS Champion?

No-disqualification trios match: Eddie Kingston and Proud and Powerful (Santana and Ortiz) vs. "Red Death" Daniel Garcia and 2point0 (Jeff Parker and Matt Lee) - This is the second straight week in which these six men have faced off, but this time, there's a twist. After Matt Lee rolled up Santana with a big handful of tights last week, Garcia and 2point0 beat down their three opponents following the match until the intervention of the returning Chris Jericho. This time, there will be no disqualification in this match meaning that Kingston, Santana and Ortiz can counter their opponents' shortcuts with ones of their own. And what about Jericho? Twice now, Kingston has let it be known that he's not looking for the Demo God's help, but Santana and Ortiz are members of the Inner Circle. Can Kingston and Jericho come to an understanding or will Garcia and 2point0 use this discord to their advantage?

Brian Pillman Jr. vs. Malakai Black - Nobody can accuse Brian Pillman Jr. of not having any guts. But has he bitten off more than he can chew? Last month on Dynamite, Malakai Black appeared out of nowhere during the Varsity Blondes' interview with Tony Schiavone and spat the black mist at Julia Hart. A week later, Griff Garrison attempted to avenge her, but he was easily dispatched off by Black. When Pillman entered the ring to tend to his partner, he ate a Black Mass from Black for his troubles. Out for revenge, Pillman's challenge to Black was accepted and the two will meet in the ring on Wednesday night. Will Pillman make Black pay the price for his actions or, as Black says, does the House of Black always win?

- Returning to singles competition for the first time since claiming the Dynamite Diamond Ring for a third straight year, Maxwell Jacob Friedman is in action