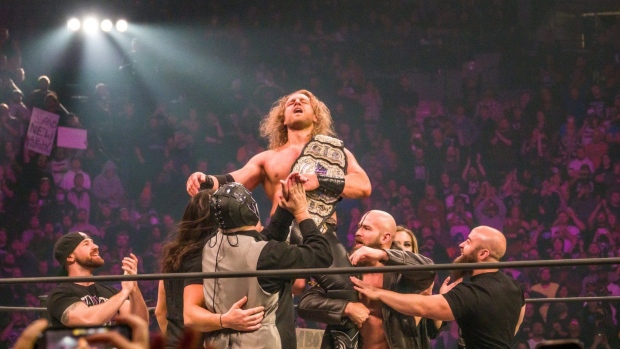 "Hangman" Adam Page celebrates his AEW World Championship victory in his home state of Virginia, while New Japan star Tomohiro Ishii and the newly signed Jay Lethal make their AEW debuts on Dynamite. You can catch AEW Dynamite LIVE at 8pm et/5pm pt on TSN2, streaming on TSN Direct and on TSN.ca.

TNT Championship match: "Spanish God" Sammy Guevara (c) vs. Jay Lethal - In what might be his toughest defence to date, TNT Champion Sammy Guevara puts his title on the line against the debuting Jay Lethal. Lethal is the most decorated man in Ring of Honor history. He is the only wrestler to have held the ROH World Championship, the Pure Championship, the World Tag Team Championship and the TV Championship making him the sole Grand Slam Champion in the promotion's history. Lethal was also a multi-time champion in Impact Wrestling where he held the X-Division title on six occasions. While his resume speaks for itself, the choice to challenge Guevara in his debut is a bold one for Lethal. Since capturing the TNT title from Miro in September, Guevara has made successful defences against both Bobby Fish and Ethan Page and has looked very comfortable holding gold. Can Guevara make it three straight defences or will Lethal make one helluva splash in his debut?

The Butcher and The Blade (w/ Matt Hardy and The Bunny) vs. CHAOS ("Freshly Squeezed" Orange Cassidy and NEVER Openweight Champion Tomohiro Ishii) - Rocky Romero's induction of Best Friends into CHAOS last week couldn't have come at a better time for Orange Cassidy. Cassidy once again found himself on the receiving end of a beating from the Hardy Family Office on last Friday's Rampage with Big Money Matt getting the victory in a lumberjack match. It was The Blade's intervention with a pair of brass knuckles that helped earn Hardy the win, so Cassidy will be out for revenge on Wednesday night and with him will be his new stablemate, one of the very best wrestlers in the world and a man who is as tough as nails in New Japan Pro-Wrestling star Tomohiro Ishii. Ishii is fresh off of capturing the NEVER Openweight Championship for a record sixth time on Saturday night, defeating "Switchblade" Jay White at NJPW's Battle in the Valley. Ishii is also a former IWGP World Tag Team Champion alongside Toru Yano and a NEVER Openweight 6-Man Champion with Yano and Best Friends' Trent?. Will the HFO once again get the better of Cassidy or will his new friend Ishii help him get the last laugh?

"The American Dragon" Bryan Danielson vs. Evil Uno - Now the No. 1 contender for "Hangman" Adam Page's AEW World Championship, Bryan Danielson steps in the ring with one of Page's friends from the Dark Order in Evil Uno. While Danielson and Uno have wrestled in many of the same promotions over the years, this will be the first ever in-ring meeting between the two veterans. But is Danielson 100 per cent? While he was victorious in the final of the World Title Eliminator Tournament at Full Gear, he took incredible punishment from Miro. A match against a member of the Dark Order is an opportunity for Danielson to get into the Hangman's head, but taking on Uno only days after Full Gear isn't anything close to a safe proposition. Can Danielson fire the opening salvo against Page or will Uno pick up an impressive singles victory?

TBS Championship Tournament quarterfinal: "The Native Beast" Nyla Rose (w/ Vickie Guerrero) vs. Hikaru Shida - Two former AEW Women's World Champions and bitter rivals meet with a spot in the TBS Championship Tournament semis on the line when Nyla Rose takes on Hikaru Shida. The history between these two women is well known. Wednesday night's match will mark the 11th bout between the two women in an AEW ring. But Shida appears to have Rose's number in big matches. It was Rose who Shida beat at Double or Nothing 2020 to win the AEW Women's World Championship and Shida then successfully defended her title against Rose at Full Gear 2020. Most recently at last Saturday's Full Gear, the team of Shida and Thunder Rosa defeated Rose and Jamie Hayter. Can Rose buck the trend to earn herself passage into the semis or will Shida continue her mastery in big-time bouts?

The Acclaimed (Anthony Bowens and "Platinum" Max Caster) vs. Dante Martin and "The Man of the Hour" Lio Rush - The team of Dante Martin and Lio Rush had a very successful debut on last week's Dynamite when they defeated Matt Sydal and Lee Moriarty in a highly entertaining match. But like Rush and Martin, Sydal and Moriarty were teaming for the first time. On Wednesday night, the duo wades into deeper water to take on a much more established tag team in The Acclaimed. The team of Anthony Bowens and Max Caster has had an outstanding 2021 in tag-team action with the lone blemish on their record coming in last month's title match against the Lucha Bros. (Penta El Zero Miedo and Rey Fenix). The step up in competition for Rush and Martin should be immense, but there is certainly enough talent to get the job done against Bowens and Caster. Will Rush and Martin make it two straight victories or will they experience a rude awakening at the hands of The Acclaimed?

- In his home state of Virginia, new AEW World Champion "Hangman" Adam Page celebrates the culmination of a two-year odyssey and victory over Kenny Omega at Full Gear. Page has declared Nov. 17 as "National Cowboy Shit Day." What kind of reception will await the Hangman in Norfolk?