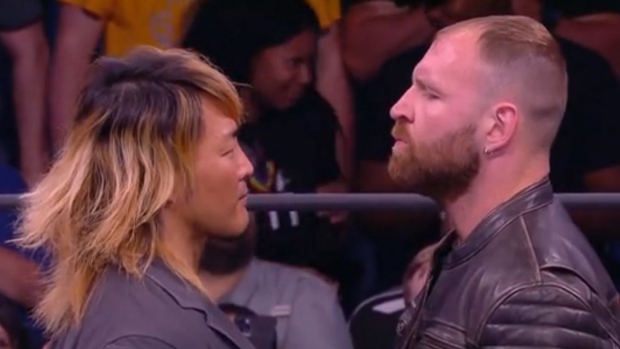 Before they face off for the interim AEW World Championship at Forbidden Door, Jon Moxley and Hiroshi Tanahashi team up to take on the team of Chris Jericho and Lance Archer. Plus, Orange Cassidy makes his return to the ring in trios action, team with Roppongi Vice to battle Will Ospreay and Aussie Open. You can catch AEW Dynamite LIVE at 8pm et/5pm pt on TSN2, streaming on TSN Direct and on TSN.ca.

Jon Moxley (w/ William Regal) and Hiroshi Tanahashi vs. "The Wizard" Chris Jericho (w/ Jericho Appreciation Society) and "The Murderhawk Monster" Lance Archer (w/ Jake "The Snake" Roberts) - Before they step in the ring on Sunday in an interim AEW World Championship match at the Forbidden Door pay-per-view, Jon Moxley and Hiroshi Tanahashi team up for the first time ever to take on the team of Chris Jericho and Lance Archer. The genesis for this match occurred on last week's Dynamite. As Tanahashi and Moxley were addressing one another in the ring, Jericho and the JAS interrupted and began to make their way down to the ring. But this was just a distraction as Moxley and Tanahashi were jumped from behind by Suzuki-gun members Archer and El Desperado. Jericho then revealed that Archer and Desperado were loaned to him by Minoru Suzuki because at Forbidden Door, it will be the JAS's Jericho and Sammy Guevara teaming with Suzuki in trios action against Eddie Kingston, Wheeler YUTA and Shota Umino. As a precursor to that match, Jericho and Archer will link up on Dynamite to inflict some damage on Moxley and Tanahashi. There is no love lost among these four men. It was Moxley who defeated Jericho for the AEW World Championship back at Revolution in 2020. Weeks earlier, Jericho was victorious over Tanahashi at Wrestle Kingdom 14 at the Tokyo Dome. Then there is of course the lengthy history between Archer and Moxley, who have each defeated the other in a Texas Death Match for the IWGP United States Championship, including a particularly violent encounter on the July 21, 2021 edition of Dynamite. While the goal for Mox and Tanahashi tonight might be not getting injured before their title match, they'd like nothing more to pick up the win over a pair of old rivals, especially ones who are out to spoil Sunday's bout. Will the new team of Moxley and Tanahashi be able to get the job done or will Jericho and Archer bring the pain?

Trios match: CHAOS ("Freshly Squeezed" Orange Cassidy, Trent Beretta and Rocky Romero) vs. United Empire (IWGP United States Champion Will Ospreay, Kyle Fletcher and Mark Davis) - Orange Cassidy made his return to AEW last week on Dynamite after spending several months on the shelf with a shoulder injury and will return to the ring on Wednesday night before going one-on-one with Will Ospreay at Forbidden Door. Cassidy teams with CHAOS stablemates Roppongi Vice (Trent Beretta and Rocky Romero) to face Ospreay and Aussie Open (Kyle Fletcher and Mark Davis) in trio's action. Last Wednesday, Ospreay emerged victorious in a classic match against Dax Harwood. After the match, Ospreay, Davis, Fletcher, Aaron Henare and the IWGP World Tag Team Champions Jeff Cobb and The Great O-Khan laid waster to the fall Harwood. Harwood's FTR partner Cash Wheeler, along with Beretta and Romero, tried to make the save but the numbers game was too much and it wasn't until the intervention of Cassidy that the tide turned. Now Cassidy and Ospreay will meet for the first time ever ahead of their title match on Sunday. Stakes are high for Beretta and Romero, as well, with Wednesday's match serving as a tune-up for their Ring of Honor and IWGP World Tag Team Championships winners-take-all three-way match at Forbidden Door against FTR and Cobb and O-Khan. It will be the duo's second shot at ROH gold after their previous match with FTR last month ended in a double disqualification as both teams were jumped by Cobb and O-Khan. Wednesday night's trios match will be all about sending a message for Sunday night. Which three men will pick up the victory?

All-Atlantic Championship four-way qualifier: Penta Oscura (w/ PAC, Rey Fenix and Alex Abrahantes) vs. Malakai Black (w/ Brody King, Buddy Matthews and Julia Hart) - With PAC, Miro and Tomohiro Ishiii having already qualified for the four-way match that will crown the inaugural AEW All-Atlantic Champion, one spot in the match remains and that will be decided on Wednesday night when bitter rivals Malakai Black of the House of Black and Death Triangle's Penta Oscura face off on Dynamite. Black is still chasing his first piece of AEW gold, while Penta is a former AEW World Tag Team Champion. While House of Black and Death Triangle have been feuding for months, this will be the first ever singles meeting between the two. Black has not been defeated in singles competition since last October and heads into the match 10-1 in his last 11 matches with the lone loss coming in tag-team action when the Kings of the Black Throne (Black and Brody King) fell to PAC and Penta on the Feb. 23 Dynamite. Passage to Sunday's match is especially intriguing for Penta, who - should he win - would have to oppose fellow Death Triangle member PAC. And if he were to win that match, Penta would join Kenny Omega, "Hangman" Adam Page and Scorpio Sky as the only people in AEW history to have held both a singles and tag-team championship. With the stakes as high as they are, can both men keep focused on the task at hand or will the visceral hatred each has for the other become overwhelming?

- With both of Forbidden Door and Blood and Guts on the horizon, "The American Dragon" Bryan Danielson addresses his status ahead of both events

- After his shocking attack on Jungle Boy following last week's ladder match for the AEW World Tag Team Championship, we will hear from Christian Cage