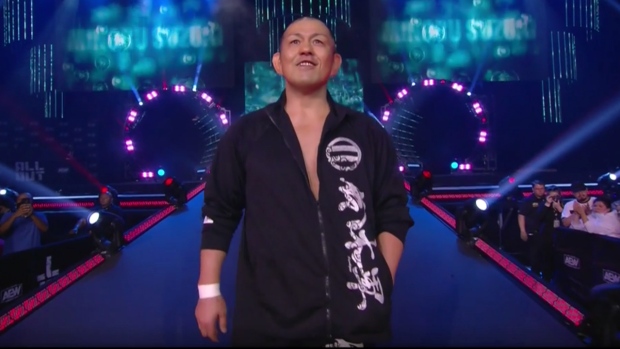 Jon Moxley returns to his hometown of Cincinnati on Wednesday night, but it might not be a happy homecoming for the former AEW World Champion when he takes on Japanese legend Minoru Suzuki. Plus, Ruby Soho makes her Dynamite debut and Malakai Black meets Dustin Rhodes. ​You can catch AEW Dynamite LIVE at 8pm et/5pm pt on TSN2, the TSN app, streaming on TSN Direct and on TSN.ca.

Jon Moxley vs. Minoru Suzuki - After defeating Satoshi Kojima in a hard-fought encounter at Sunday night's All Out pay-per-view, Jon Moxley once again came face to face with one of the baddest men in the history of professional wrestling in Minoru Suzuki. The former King of Pancrase and All Japan Pro Wrestling Triple Crown Heavyweight Champion proceeded to lay out Moxley with his patented Gotch-Style Piledriver. If you've never experienced a Minoru Suzuki match before, they are, in a word, brutal. Few men in modern pro wrestling are as intense, hard-hitting and vicious as Suzuki. Wednesday night's match will not be the first meeting between the two men. In fact, Suzuki has come to AEW to get a measure of revenge on Moxley. At New Japan Pro-Wrestling's New Beginning in 2020, Moxley retained his IWGP United States Championship over Suzuki in a wild brawl that saw Mox put Suzuki away with the Death Rider/Paradigm shift. Now on Moxley's home turf, Suzuki doesn't have a title to wrestle for - only vengeance. Can Moxley make it two in a row over Suzuki or will Suzuki get his revenge.

Malakai Black vs. "The Natural" Dustin Rhodes - Since arriving in AEW, Malakai Black has made it his mission to end the Nightmare Family. His work has been swift and brutal. Already having taken out Cody Rhodes, Arn Anderson, Brock Anderson and Lee Johnson, Black now meets Dustin Rhodes, who is out to avenge his brother and his friends. But just what is Rhodes getting himself into here? Black has backed up all of his talk with action and has vowed that Rhodes will end up just like everybody else. Rhodes enters the match not having lost a singles match in 364 days, yet another victory is unlikely on The Natural's mind heading into Wednesday night. He's going to get a piece of Black, one way or another. Will Rhodes avenge his fallen compatriots or will Black add to his list of victims.

Ruby Soho vs. Jamie Hayter (w/ Dr. Britt Baker, DMD and Rebel) - Fresh off of winning the Women's Casino Battle Royal at All Out, Ruby Soho makes her Dynamite debut against the AEW Women's World Champion's muscle in Jamie Hayter. By eliminating Thunder Rosa and being the last woman standing in the battle royal, Soho earned herself a shot at Britt Baker and her title, but before she can do that, she'll have to get through Hayter. While Soho and Hayter have wrestled in some of the same promotions over the years, Wednesday night is the first ever meeting between the two women. Hayter's goal heading into the match is simple - soften up Soho for Baker or better yet, inflict so much damage that she can't even make it to her title match at all. On top of Hayter in the ring, Soho will have to deal with both Baker and Rebel on the outside of it. Can Soho keep the momentum going or will Hayter quickly put a stop to it?

- What's next for "The American Dragon" Bryan Danielson after his arrival in AEW at All Out?

- Kenny Omega might have retained his AEW World Championship at All Out, but The Young Bucks lost their AEW World Tag Team Championships to the Lucha Bros. How will The Elite, now with Adam Cole back in the fold, regroup?