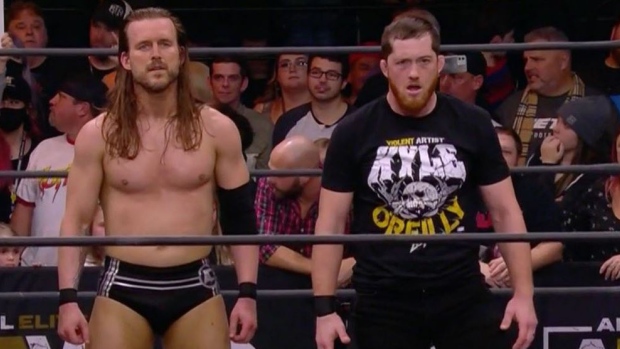 Delta, BC's Kyle O'Reilly made a shocking appearance on last week's Dynamite and is set to make his in-ring debut on Wednesday night as he teams with longtime associates Adam Cole and Bobby Fish to take on Best Friends (Orange Cassidy, Chuck Taylor and Trent?), plus Jade Cargill meets Thunder Rosa for a spot in the TBS Championship Tournament final. You can catch AEW Dynamite LIVE at 8pm et/5pm pt on TSN2, streaming on TSN Direct and on TSN.ca.

Trios match: Adam Cole, Bobby Fish and Kyle O'Reilly vs. Best Friends ("Freshly Squeezed" Orange Cassidy, Chuck Taylor and Trent?) - Kyle O'Reilly has arrived in AEW. The former ROH World Champion and multiple-time tag-team champion in promotions across the world has once again aligned with old friends Adam Cole and Bobby Fish. The trio was a part of the Undisputed Era faction in NXT and, before that, O'Reilly tagged with each man on a regular basis as Future Shock and reDRagon, respectively. A force to be reckoned with, O'Reilly's first AEW contest comes against the man he wronged last week in Orange Cassidy, who was defeated by Cole thanks to O'Reilly's interference. The match only added fuel to the fire in what has become a heated feud between Best Friends and The Elite. Can Best Friends get revenge for last week or will O'Reilly's AEW debut be a successful one?

TBS Championship Tournament semi-final: Thunder Rosa vs. Jade Cargill (w/ "Smart" Mark Sterling) - Jade Cargill's unblemished record faces its stiffest test to date when she takes on former NWA Women's World Champion Thunder Rosa for a spot in the TBS Championship Tournament final against Ruby Soho. Cargill reached the semis with a win over Red Velvet while Thunder Rosa booked her spot by defeating Jamie Hayter. While this is the first time these two women meet one on one, it's not the first match between the two. On the Oct. 1 edition of Rampage, the two faced off in a no-disqualification three-way dance with Nyla Rose as the third competitor. After Thunder Rosa put Rose through a table on the outside, effectively removing her from the equation, Cargill rained down on Rosa with a number of chair shots to pick up the victory. Rest assured, Thunder Rosa hasn't forgotten about this and she's just as much out for revenge as she is looking for gold. Will Cargill's undefeated run continue or will Thunder Rosa advance to the final?

Trios match: Eddie Kingston and Proud and Powerful (Santana and Ortiz) vs. "Red Death" Daniel Garcia and 2point0 (Jeff Parker and Matt Lee) - Say what you will about Daniel Garcia and 2point0, but the trio knows how to make enemies in a hurry. Garcia first met Eddie Kingston on the Black Friday edition of Rampage when "The Mad King" emerged victorious. That didn't settle things as Jeff Parker and Matt Lee jumped Kingston after the match, leading Chris Jericho to leave the commentary booth to make the save. Jericho would pay for his good deed when he was laid out by the trio on the Dec. 1 Dynamite and hasn't been seen since. That attack dragged Jericho's Inner Circle stablemates and Kingston's fellow New Yorkers Santana and Ortiz into the picture. On the Dec. 17 Rampage, Garcia, Parker and Lee teamed with The Acclaimed (Anthony Bowens and Max Caster) to defeat Kingston, Santana, Ortiz and the AEW World Tag Team Champions Lucha Bros. (Penta El Zero Miedo and Rey Fenix) in a 10-man tag match. The sides are now 1-1, but the enmity between the two hasn't abated at all. One thing is for certain, Wednesday night's match is unlikely to be pretty.