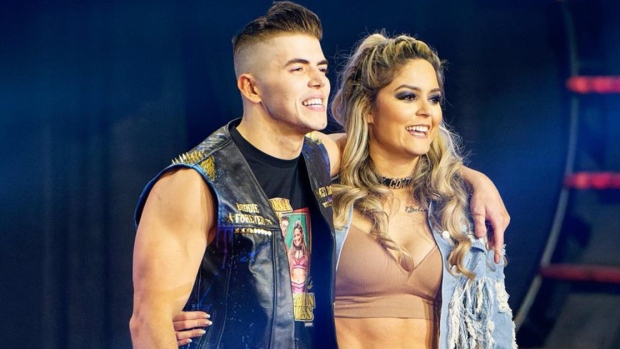 Scorpio Sky gets his rematch against Sammy Guevara for the TNT Championship in a ladder match. Plus it's FTR versus FTR as Dax Harwood meets Cash Wheeler in an Owen Hart Foundation Cup qualifier and the Undisputed Elite are in 10-man tag action. You can catch AEW Dynamite LIVE at 8pm et/5pm pt on TSN2, streaming on TSN Direct and on TSN.ca.

TNT Championship Ladder Match: "The Spanish God" Sammy Guevara (c) (w/ Tay Conti) vs. Scorpio Sky (w/ Ethan Page and Dan Lambert) - Sammy Guevara became a three-time TNT Champion at Battle of the Belts when he defeated Scorpio Sky (thanks in large part to using a low blow). But things have changed since Guevara was last champion. The fans who once firmly backed him have soured on him and this doesn't seem to bother him or girlfriend Tay Conti in the slightest. The pair was withholding a rematch from Sky until he agreed to a mixed tag-team match between Guevara and Conti and Sky and Paige VanZant, who's been a thorn in Conti's side for some time now. The ladder match aspect of the rematch changes the equation quite a bit. Both men have had success in ladder matches in their AEW careers. At Revolution 2021, Sky emerged victorious in the Face of the Revolution Ladder Match, defeating Max Caster, Penta El Zero Miedo, Ethan Page, Cody Rhodes and Lance Archer. In January, Guevara unified the interim and regular TNT Championships in January with a ladder match victory over Rhodes. The peril that comes with ladder matches doesn't seem to faze either man at all. Can Guevara hang on to his title or will Sky once again claim gold?

Owen Hart Foundation Cup qualifying match: AAA and ROH World Tag Team Champion Dax Harwood vs. AAA and ROH World Tag Team Champion Cash Wheeler - FTR might be the hottest tag team in the industry right now, but on Wednesday night Dax Harwood and Cash Wheeler will stand on opposite sides of the ring in a one-on-one match with the winner advancing to the Owen Hart Foundation Cup. It will mark the first time in their careers that the two men have met as opponents. But the match was their idea. Harwood and Wheeler lobbied AEW president Tony Khan to have the match made because the Hart family means so much to each man. Their love for Bret "The Hitman" Hart is no secret to anybody who knows anything about them, but the pair says their respect for Owen Hart runs just as deep. As to who will emerge victorious, it's impossible to say. The only person who might know a wrestler better than themselves is their tag-team partner. Harwood and Wheeler certainly know each other's strengths, but they also know each other's weaknesses. Which member of FTR will get the better of the other? Fellow Hart aficionado CM Punk will sit in on commentary for the match.

Ten-man tag-team match: Undisputed Elite (Adam Cole, Nick Jackson, Matt Jackson, Bobby Fish and Kyle O'Reilly) (w/ Brandon Cutler) vs. The Varsity Blonds (Brian Pillman Jr. and Griff Garrison), Dante Martin, Lee Johnson and Brock Anderson (w/ Arn Anderson) - On last week's edition of Dynamite, Adam Cole attempted to rally the troops after he failed to capture the AEW World Championship from "Hangman" Adam Page, reDRagon couldn't pry the AEW World Tag Team Championships from Jurassic Express and the Young Bucks fell to FTR for the AAA and ROH World Tag Team Championships. Cole's positive new attitude appeared to pay immediate dividends. Later that night, Kyle O'Reilly defeated Jungle Boy for a spot in the Owen Hart Foundation Cup. Then on Friday's Rampage, Cole punched his own ticket to the tournament by defeating Tomohiro Ishii. Of course, Cole had some assistance from "Switchblade" Jay White, who distracted Ishii to allow Cole to capitalize. Cole and White have made it clear that the Undisputed Elite/Bullet Club alliance runs deep, but that's something that doesn't seem to sit well with former Bullet Club members Nick Jackson and Matt Jackson. On Wednesday night, Undisputed Elite will look to continue to build momentum after the team of Brian Pillman Jr., Griff Garrison, Dante Martin, Lee Moriarty and Brock Anderson answered their challenge for a 10-man tag made last week. While this team is full of youthful exuberance, they don't have the experience of their much more seasoned foes. Can they pull off a shocking upset or will the Undisputed Elite keep on rolling?

"The Murderhawk Monster" Lance Archer (w/ Jake "The Snake" Roberts) vs. "Mr. Mayhem" Wardlow - After The Butcher couldn't get the job done against Wardlow last week, Maxwell Jacob Friedman has turned to a literal monster in his quest to run his former bodyguard out of AEW. On Dynamite, Lance Archer is the latest mercenary to attempt to take out Wardlow at MJF's behest. There's nothing the former IWGP United States Champion loves more than wanton violence other than getting paid for it, so Archer might be the perfect candidate to do MJF's dirty work for him. But can he take out Wardlow? The hulking former Pinnacle member has been a buzzsaw of late, taking out security guards and subjecting The Butcher to the Power Bomb Symphony last week. He's made it clear that he's willing to do whatever it takes to get his hands on the man who still signs his cheques, so Wardlow won't be daunted by the prospect of going one-on-one with the imposing Archer. Will MJF finally deter Wardlow or will "Mr. Mayhem" leave "The Murderhawk Monster" in his wake?

Philadelphia Street Fight: Hikaru Shida vs. "The Professor" Serena Deeb - One of AEW's longest-running rivalries comes to a head on Wednesday night when bitter rivals Hikaru Shida and Serena Deeb meet in a Philadelphia Street Fight. It will be the fifth match between the two women and the first with no disqualifications. Each woman is 2-2 in the previous four encounters. It was perceived disrespect by Shida that spurred Deeb to adopt her new attitude several months ago. In a Dynamite match in October, a plaque had been made to commemorate Shida's 50th victory, becoming the first woman to do so in AEW. Except she hadn't actually won a 50th match by that point and Deeb took that premade plaque as an insult before using it as a weapon on Shida after the match. The pair last met on Jan. 1 edition of Dynamite in which Deeb picked up the victory and since that win, Deeb has been a machine. Deeb has won all six of her matches following the win over Shida, with only a combined 11:39 of ring-time needed to do so. Will Deeb's streak keep going or can Shida put an end to their rivalry?