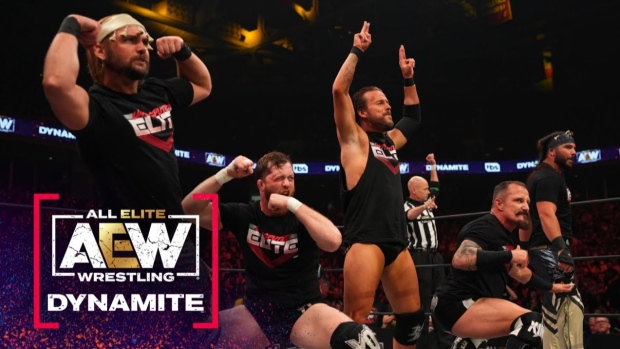 10-man tag-team match: Hikuleo and Undisputed Elite (Nick Jackson, Matt Jackson, Bobby Fish and Kyle O'Reilly) (w/ Brandon Cutler) vs. AEW World Tag Team Champions Jurassic Express (Jungle Boy and Luchasaurus), Christian Cage, Matt Hardy and Darby Allin - Originally, this match was scheduled to be a 10-man tag match, but with both of Jeff Hardy and Adam Cole banged up, both men were dropped from their respective teams to make it an eight-man tag, but some late editions have once again brought it back up to 10. In place of Cole comes the Bullet Club's monstrous Hikuleo. The son of the legendary Haku's presence cements the bond between the Bullet Club and Undisputed Elite and gives the Young Bucks and reDRagon a monster of their own to counter Luchasaurus. Replacing Jeff Hardy on the other side is Darby Allin, still hungry for revenge against Kyle O'Reilly. It was O'Reilly who Pillmanized Sting's knee with the Bombs Away kneedrop on last week's Dynamite. It was also a Bombs Away that gave O'Reilly the victory over Allin in their singles match at Sunday's Double or Nothing pay-per-view. The Jacksons are also out for retribution after losing to the Hardys in their tag match at DON. When there are this many men in the ring, the chances of everything breaking down are sky high. The team that can best take advantage of that will be the team that comes out on top. Which of these teams will emerge victorious?

Jon Moxley (w/ William Regal) vs. Daniel Garcia (w/ Jericho Appreciation Society) - Daniel Garcia loves being in Los Angeles. Not only was he the winner of Pro Wrestling Guerrilla's 2022 Battle of Los Angeles, defeating "Speedball" Mike Bailey in the final, but he is now the reigning PWG World Champion, defeating Bandido for the title last month. Now making his return to LA, Garcia does battle with familiar foe, Jon Moxley. Both men faced off at Double or Nothing's "Anarchy in the Arena" match, a bloody spectacle in which the Jericho Appreciation Society (Garcia, Chris Jericho, Jake Hager, Angelo Parker and Matt Menard) emerged victorious over Moxley, Bryan Danielson, Eddie Kingston, Santana and Ortiz. While the JAS won the battle, the war appears from over and the next front opens with Mox taking on Garcia. The match marks the second singles meeting between the two men. At "The First Dance" edition of Rampage last September, Moxley put Garcia to sleep with the Bulldog Choke. Garcia will be looking to ensure that doesn't happen again. And let's not overlook the other elements that could come into play here. Where one member of the JAS goes, others are likely to be present, so it would behoove Moxley to have some backup of his own. Can Garcia square his record against the former AEW World Champion or will Moxley make it two straight over the Buffalo-born sports entertainer?

Dr. Britt Baker, DMD, and Jamie Hayter (w/ Rebel) vs. Ruby Soho and Toni Storm - Fresh off of winning the inaugural Owen Hart Foundation Cup at Double or Nothing, Britt Baker teams up with Jamie Hayter to take on the two women she beat to claim the Cup: Toni Storm, who she beat in the semi-finals, and Ruby Soho, who she defeated in Sunday's final. While both Storm and Soho would love to avenge those losses, they have had success against this very tag team in the past. On the May 6 edition of Rampage, Soho and Storm defeated Hayter and then AEW Women's World Champion Baker when Storm hit Baker with Strong Zero. A repeat of that result will avenge Soho and Storm's losses in the tournament, but will also demonstrate their intent in the women's division with both AEW Women's World Champion Thunder Rosa and TBS Champion Jade Cargill coming off of victories at Double or Nothing and in need of new challengers.

- After defeating the team of Tony Nese and "Smart" Mark Sterling at Double or Nothing, what's next for Hookhausen (Hook and Danhausen)?