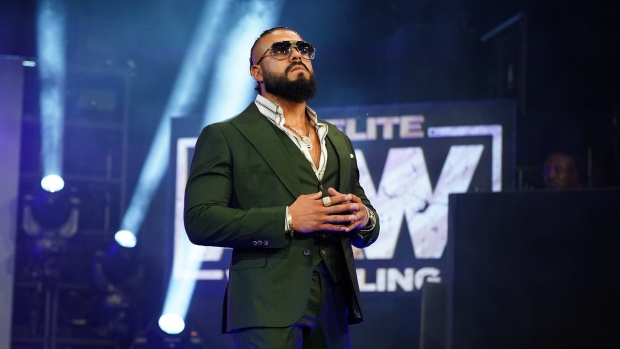 Andrade El Idolo (w/ Jose the Assistant) vs. "The Bastard" PAC - The rivalry between Andrade and Death Triangle has been simmering for some time with Andrade upping the stakes on last week's Dynamite. Paying MJF for their services, Andrade put FTR (Dax Harwood and Cash Wheeler) under masks and had them take on the Lucha Bros. (Penta El Zero Miedo and Rey Fenix) for their AAA World Tag Team Championship. Thanks to interference from Tully Blanchard, FTR was able to take those titles and PAC will be out for revenge when he takes on Andrade. This is obviously not the first time that these two have crossed paths. After having originally been scheduled for last month's All Out pay-per-view, the two met on the Sept. 10 edition of Rampage from Cincinnati. With PAC seemingly having the match won after locking in the Brutalizer, a referee distraction from Jose and an iPad shot to the head from Andrade's then advisor Chavo Guerrero Jr. allowed for El Idolo to pick up the pinfall. Will Andrade come out victorious again or will PAC even up their series?

World Title Eliminator tournament match: "Freshly Squeezed" Orange Cassidy vs. Powerhouse Hobbs (w/ Hook) - The World Title Eliminator returns for a second straight year with the tournament winner receiving a shot at the AEW World Championship. Current champion Kenny Omega was last year's winner and used his shot to win the title, demonstrating the importance of this tournament. Both Orange Cassidy and Powerhouse Hobbs are first-time entrants in the tournament, having not been involved with last year's edition. But Cassidy and Hobbs are no strangers to one another. This will mark the third meeting between the two in AEW. Cassidy was victorious in a singles match on AEW Dark in the summer of 2020 and won again last December when he teamed up Cody Rhodes and Preston "10" Vance to defeat Team Taz (Hobbs, Brian Cage and Ricky Starks). Will the third time be the charm for Hobbs or will Cassidy continue his dominance? The winner of this match will move on to face the victor between 10 and Jon Moxley.

Non-title match: AEW Women's World Champion Dr. Britt Baker, DMD (w/ Jamie Hayter and Rebel) vs. Anna Jay - This match was set up when Britt Baker inserted herself into Anna Jay's backstage interview on Dynamite last week and the two women came to blows. For Jay, it's the most important match since her return from a lengthy spell on the sidelines with a shoulder injury. A victory over Baker would put her in line for a shot at the world title. But that could be easier said than done for Jay. Baker has not lost a standard singles match since last February and heads into the match on a 12-match winning streak in singles competition. Can Jay force her way into the title picture or will Baker keep rolling?